10 of the best Unearthed discoveries so far this year 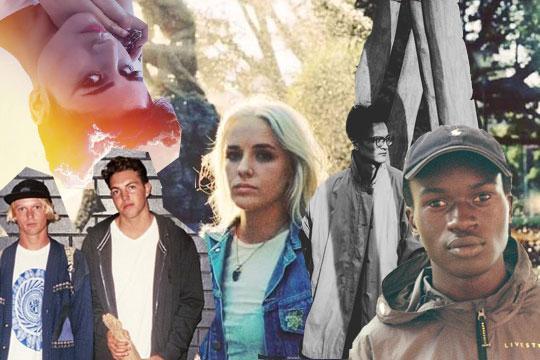 Six months and over 10,000 new track uploads into 2014 the triple j Unearthed team can safely say the quality of independent music being made in Australia this year is absolutely astounding. We've heard jaw-droppingly good sounds from all corners of the country but these ten discoveries totally take the cake.

In February, on what we can only assume was a sunny day, Brisbane's Hannah Shepherd uploaded her bliss-inducing tune 'Ouroboros' under the moniker of Airling. Since then, we've heard her equally beguiling track 'The Runner', seen her tour with James Vincent McMorrow and Ásgeir and crowned her 2014's Unearthed winner of our Splendour in the Grass competition, which will see her open the festival later this month. It's lush dream pop with soaring vocal progressions atop some hella tight production from Big Scary's Tom Iansek and it's not to be missed tbqh.

Brisbane's The Furrs chucked up 'Get On Your Horse' on Unearthed back in February and we immediately fell head over heels for their rebellious, fuzzy goodness. It’s like they don't give a shit, but they do, but they don't want you to know that they do. Either way, we reckon they’re kicking goals with that dirty brand of bluesy rock 'n' roll that has enough 'tude to keep your mum away and some infectious riffs to get you moving and shaking. It’s been a big six months for The Furrs as they punched out a self-titled EP featuring second single 'Little Boy' and roped in a few extra mates in their live setup. If they can keep up this pace these furry Queenslanders should have the world conquered come 2015.

UV boi is an 18 year old producer from Brisbane whose mellow yet heavy-hitting 808 music created a sea of feelings in our heart. His first Unearthed upload 'ghost (Ft. GRXGVR)' made us squat down and listen, and 'THANK U (Ft. Fionn Richards)' was way too tasty to ignore. Let's just say that Cupid's bow was filled with supa hot icy fire when he fired UV boi's hip hop at us.

While this list is all about some of our favourite new discoveries from Unearthed in 2014, the lines become a little blurred when we come to Montaigne. Let's agree to call this one a re-discovery, okay? Our first exposure to Montaigne came in 2012 when the young Sydney performer uploaded her first tune as Jessica Cerro, going on to become an Unearthed High finalist that year. We already knew that Jess had a freakish musical talent for a teenager but she's confounded expectations further with her re-emergence as Montaigne. Lead cuts 'I'm A Fantastic Wreck' and 'I Am Not An End' show off Jess' powerful voice as well as a classy approach to pop songwriting which has clearly come with age. It's an emphatic statement of the next chapter for this young star.

In a matter of years, space travel will be an everyday thing, we’re sure of it. So when you get propelled into the Milky Way, make sure you take some music from Jasia because we felt like we were floating when we first heard 'Inverbatim'. In fact, maybe you don’t even need to go to space because the Melbourne bro can take you to a serene, divine place without the $200k price tag. Layers are key to his music; the bass melds effortlessly with the orchestral synth elements whilst the warped falsettos envelop you in a matter of seconds. Jasia splits his time between London and Melbourne which means he is a pro at two things: experiencing crappy weather and, as we have found out this year, dishing out addictive, blissful music.

So what's this? A hot mess of electronic manipulations and future RnB wound tight around the "boom-bap grooves of hip hop", that's what this is. Producer Barnaby Matthews and vocalist Conor McCabe are Melbourne duo Fortunes, delivering slow, dark, soulful and very smoove mp3s like ‘Keeper’. Light a candle. Pour a glass of wine. Turn up the bass. Relax, you've made it.

It's been a real joy to find WZRDKID this year and watch the Mildura boys flourish since taking out honours as the winners of the One Night Stand Unearthed competition a couple of months back. It's also a good reminder of triple j Unearthed's roots as an initiative to uncover the best talent in regional Australia. That's WZRDKID right there. Isolated from much of the Australian hip hop scene, WZRDKID have been refining their sound closely and on 'Hitchhiker's Galaxy' they show off this starkly well realised point of view that's part thoughtful, introspective rap and star-gazing electronic production. Partial though they may be to a space reference, WZRDKID do indeed sound worlds away from what's going around at the moment.

At just 16, East is already proving to be a formidable talent. Her upbeat, yet melancholic track 'Old Age' combines belting vocals, earnest lyrics and just the right amount of 'ooohs' in the background to make it one catchy little debut ditty. As she sings "Oh won't you tell me dear / Where do I go from here?" it seems that the only reasonable answer is, well, far.

Zach Stephenson and Billy Fleming are surf-rock garage-pop Wollongong duo Hockey Dad, and hoo boy can they craft a song that's scuzzy in all the right places. If you can't take a holiday press play on ‘I Need A Woman’ from their brand new EP Dreamin’ and let your mind drift off to the leisure coast. You deserve it.

Now we don't want to start any (wildly unsubstantiated) rumours regarding time travel and wormholes but if you were curious about such theories and happened to think that somewhere between the Australian mainland and its southern island offshoot Tasmania there existed a portal into the past, then Hobart's Violet Swells would be the proof in the proverbial pudding. And what a horribly long-winded pudding it is, too. Since January the Hobart five piece have been peppering their Unearthed profile with nuggets of expertly executed and sunny psychedelic pop that you'd think you were crossing Haight and Ashbury during the summer of love. Referencing The Beach Boys, Syd Barrett and the more modern Stereolab, Violet Swells pull it off with an authenticity that is difficult to fake. And that is likewise difficult to not sway and smile to.