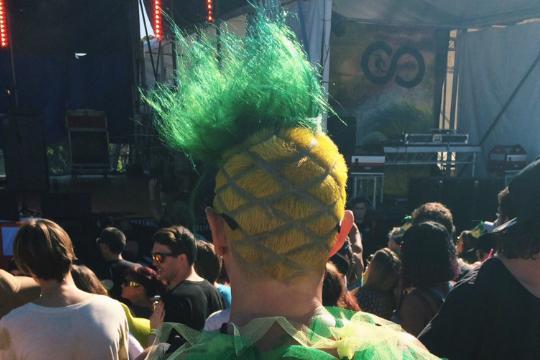 We gave Unearthed Super User Kristy Barker a AAA pass to her hometown festival. Kritty's got a huge love for new music and she's been writing v v vibey reviews for us for a hot while. She even made BFFs with Nina Las Vegas when she was in our studios recently.

The Big Piney lineup was massive this year, featuring bignames like Thundamentals, The Jezabels and Unearthed comp winners Pro Vita.  There was also a man who shaved and dyed his head into a pineapple. It was a big deal. Pics below. Here's what Kristy saw and heard at Big Piney 2015:

This was one of the most entertaining days of my life for many reasons. Firstly because of the lineup - artists like John Butler Trio, Violent Soho, The Jezebels and Thundamentals were responsible for melting faces, initiating thrash dancing, happy tears and all round good times. Secondly because people watching is my favourite game and the people of the Sunshine Coast are a bunch of legends who know how to have a good time.

It was the perfect day for it - the Sunny Coast lived up to its name and was being a total show off. Unearthed winners Pro Vita opened up the main stage and kicked things off so right: already people were having a bit of a bop and a sway on the hill showing love for new hometown heroes.

By the time these cruisey dudes finished setting the vibe for the day, I had already spotted some wild characters out and about.

Apparently t-shirts and shoes are optional and there were so many pineapple and non-pineapple related costumes I began to wonder if there was a best dressed competition I was unaware of. Coin Banks was a strong contender with his piney get-up:

Although I think the champions were the two adventurous humans who had cut and dyed their hair in homage to the fruit of the day:

Highlights and things to note included: Timberwolf’s effortless cover of Tame Impala’s ‘Cause I’m A Man’, Dallas from Dallas Frasca surfing the crowd on a blow up castle which got overturned and resulted in her flying off face-first into the dirt (she took it really well), there was a contextless ‘Butter Chicken’ chant at one stage, and Dune Rats’ crowd favourite ‘Dali Lama, Big Banana, Marijuana’, became the big karaoke it was always destined to be. Alongside that, we were treated to the 3 word phrase in Violent Soho’s ‘Covered In Chrome’ that punters love to scream, The Jezebels delivering a perfect set for a festival and John Butler proving he is a banjo playing wizard with magic fingers.

It was a really feel-good day.Overall the atmosphere was buzzing: The Big Pineapple tries to please everyone and it did just that. Bringing together such a diverse crowd, and being in such a #cool setting, it’s something the Sunshine Coast should be pretty proud of.