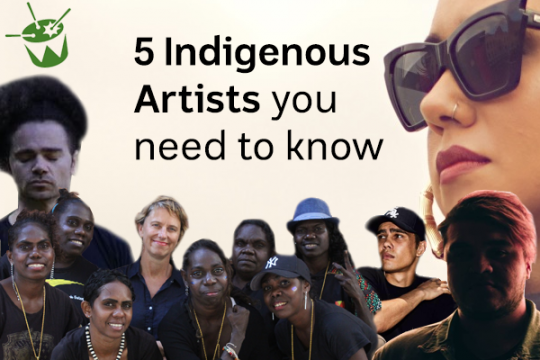 Every year, more and more incredible Indigenous Australian artists are coming to triplejunearthed.com as a platform to share their gifts and stories with a thriving community of Australian music lovers.

These are 5 Indigenous Artists You Need To Know in 2018; important, Australian voices that we're stoked to be able to share with you. Below, a beatmaster general, a band of desert diamonds, and some of the best new rappers going. Meet 'em now!

The project of poet, MC, and instrumentalist Neil Morris, DRMNGNOW explores Australian nationhood and sovereignty. He’s passionate, politically inclined, and pretty airtight in his commentary: “whose land are you standing on? Know the history, know the facts,” he encourages on new one ‘Indigenous Land’. He’s shaping up as an artist as notable as he is quotable.

HVWKS is the shadow prince of Australian electronic music. His songs are borne of a nebulous realm:  the Buzzsaw ricochet of his oscillating synths, the midnight dark of his melodies, massive drops that act as a dancefloor EpiPen.  He’s only a few tracks deep into his career, but already it’s clear that the potential is there for him to follow the path scorched by electronic overture overlords like Skrillex and RL Grime. Pay attention.

A brand new voice from Sydney’s Eastern Suburbs, Kobie Dee is equal parts bark and bite. ‘Right Now’ is his debut tune, and it arrives as a statement of intent: “shit’s getting hard for a young, black Man,” he chest-thumps over a caustic, fizzing beat. He’s already showing off an advanced flocabulary, slicing like teppanyaki, all punch, no fruit. Listen in for all the hallmarks of an advanced rapper, and freak out when you realise that Kobie Dee is just warming up.

One of our Artists to Watch in 2018, Kaylah Truth is an honest-to-goodness soothsayer. She’s the self-proclaimed first lady of Brisbane, and on 2017’s ‘Wave’ and ‘Like Crazy’, she baptised us with brown-snake bars and hard-won wisdom. Hers is an important voice, and now is the time for you to listen up.

Mangrove Mermaids Ripple Effect Band are a group of women from Arnhem Land in the Northern Territory’s top end. Their music draws on both traditional and contemporary sounds in a celebration of Indigenous culture past and present, and incorporates four different Aboriginal languages, and also English. They’re infused with the kind of energy you can’t conjure artificially – much more geothermal than they are guarana – and pack in some impressive melodies, too. Great.