7 important new voices that need to be heard 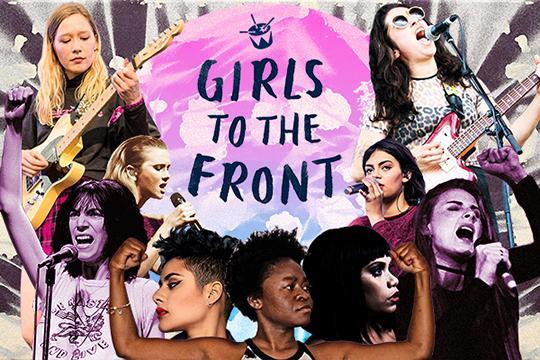 This International Women's Day, triple j Unearthed is bringing Girls To The Front! We're putting the spotlight on seven new female voices with something important to say. These women are breaking boundaries and initiating change through their music. Meet 'em below.

"It's mostly about guys that feel really threatened by powerful women, guys who just can't handle girls with strong personalities and will just try and put them down. And I wrote these lyrics about one of my ex-boyfriends who was super, super abusive. It made me feel so good singing that and running around just owning him."

"I get to be this disruptive unapologetically"

Brisbane rapper Miss Blanks is flipping the script on traditional hip-hop by addressing sex from a woman's perspective and making it empowering. By reclaiming her body and sexuality, she demands women's needs be put first both in the bedroom and in general.

"Me being able to be a transwoman of colour, being this visible, specifically in music specifically in hip hop, that in itself is courageous, rebellious and I'm at a stage where I get to be this disruptive unapologetically. I want women to listen to my music, whether they like it or not, at least take something from it and be like "I'm a boss, I run this.""

"It's unacceptable that women have a whole different standard in life"

Glitoris are a four piece feminist punk band from Canberra, and like many other punk bands, were formed in the throes of systemic oppression: "We were angry and upset with the way women have been underrepresented in the music industry and we tackle issues from feminism to racism to getting angry about the world." It's 2017, but Glitoris argue that the struggle for equality is only mounting, and they're gearing up to fight double standards and internalised misogyny.

"I think being a female in the last six months of the world has been really challenging. Women are put to a higher standard at work than men so if a woman speaks out about something she sounds shrill, she sounds annoying, she sounds like she shouldn't be talking because her voice isn't associated with what we know as leaders. We associate leadership with a deep male authority figure and if suddenly a woman is in there, she looks like she shouldn't be in there. I think it's unacceptable that women have a whole different standard in life, when we are educated the same and have the same training"

We first discovered Le Pie in 2015 with her dreamy 60s-pop number 'Secrets'. After a two year break, she's returned to tell a her very raw, personal story of being a young single mother, and how it can leave women feeling isolated. Her latest single 'White Walls & Promises' is about motherhood, what it's like to be a young single parent, and the breakdown of a relationship that happened around that child.

"I guess what I would like other young women to take from that is that maybe they're not alone that they're not the only people that have gone through this and there is possibility for you to find hope on the other side of what's a really awful situation."

Ruby Markwell started her folk-punk band The Football Club when she moved to Melbourne from Brisbane to transition to female. As one of a very small number of visible transwomen in the scene, let alone music more generally, she feels a responsibility to represent the stories of those like her.

"When you end up getting Facebook messages like we get all the time being like, 'this song was really important', you feel a sense of responsibility to people who are like you to tell their stories and show how people like us really live, because it was only a few years ago that there weren't any people like us getting the opportunities that we're getting. It's fantastic that these days we can have people like Laverne Cox come to the forefront of the media and the cover of magazines and can end up rising to popularity already out and publicly trans and existing in the world"

Meet Canberra outfit Moaning Lisa. They're addressing harassment at their gigs with a three-finger safety signal that can alert the band and those around to unsafe or abusive behaviour. It's helping to reduce the bystander effect and make music spaces safer for everyone.

"At the heart of it, if people don't go to shows and don't see live music, they're not gonna wanna be involved in music. It's super, super important to make sure that those spaces are safe for non-men to go to shows so that they can have the opportunity to experience music being played by people like them and be inspired maybe to go and produce music themselves or just somehow become involved in music."

“I can shred just as hard as any of these men”

Nikki fronts Melbourne outfit Pagan and the band wanted to do something a bit more relevant to women, non-binary and queer folk feeling underrepresented in the punk rock scene. Opening up UNIFY for Unearthed earlier this year, Pagan were one of the few female-fronted acts on the bill.

“It was pretty intimidating, I really tried not to let that get to me though. I actually met one of the other girls who sings for Drown This City, and it was so nice because I automatically felt like this real camaraderie. It was a little intimidating but then then I just got up there and I was like “Hey, I can shred just as hard as any of these men, I’m gonna just show them there should be more women doing it.””