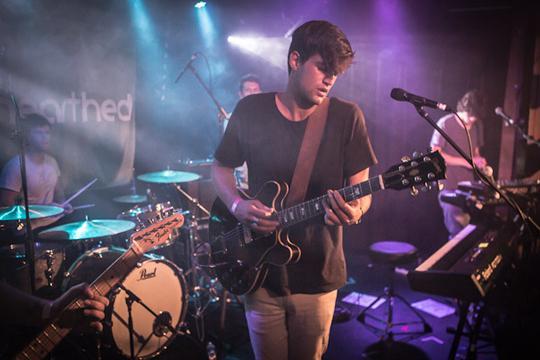 What a day! Yesterday’s Hottest 100 countdown was a massive one for Australian music, and an equally massive one for artists who’ve uploaded their independent Australian songs to triplejunearthed.com. In total, yesterday’s countdown featured 30 songs from 25 artists that we first discovered on triplejunearthed.com, including three Unearthed J Award winners (The Rubens, Meg Mac, Boy and Bear), two Unearthed High champs (Japanese Wallpaper, Asta), two of our Unearthed J Award finalists from last year (Boo Seeka, Valllis Alps), and a tonne of Unearthed comp winners and former Feature Artists. We’ve tracked the Unearthed journey of just a few of the standout artists from 2015:

The Rubens became the first ever Unearthed J Award winners to take out the #1 spot in a Hottest 100 with ‘Hoops’. It’s a massive achievement for a band from Menangle, NSW, that we first discovered in 2011. Here’s our Music Director Dave Ruby Howe on twitter yesterday:

First week at Unearthed in 2011 and I heard Lay It Down by @therubensmusic. It's been INCREDIBLE to watch them get to this moment!

The success of ‘Hoops’ is a testament to the kind of quality songwriting that has been the band’s calling card for years, and we’re stoked to see them hitting these kind of heights. It’s a far cry from the band who told us that they were “just trying to save up enough money to move out of mum’s place” in their first ever radio interview in 2011. “I think I just like music because it means that maybe one day we won’t have to have a real job,” Sam from the band told us back in their first ever triple j interview. “I can’t handle the fact that I might have to get up at 7 o’clock to go to a terrible job that I hate. We’re going to keep going anyway, even if we’re playing in the Menangle pub”.

Hear that supercute chat in full:

Meg’s another Unearthed J Award winner who crushed it in the countdown yesterday, taking out #11 with ‘Never Be’. It’s a song full of soul from an artist who’s never been lacking in that department: we first met her in October 2012, when she uploaded soul rocket ‘Known Better’ to triplejunearthed.com. You can still download that track and 'Every Lie' on her Unearthed profile. A year later, she was opening up Falls Festival as one of our Unearthed comp winners, and she’s now made her highest Hottest 100 placing to date – ‘Never Be’ jumped ‘Roll Up Your Sleeves’, which came in at #24 last year. In spite of all that success, you should still be watching this space – her forthcoming debut record is one of the 20 most anticipated albums of 2016.

Count a landmark four Hottest 100 entries for this year’s J Award winner for Australian Album of the year. Courtney Barnett’s Unearthed journey began in 2012, when she uploaded ‘Lance Jr’ and ‘Scotty Says’ to her artist profile. You can still download both those songs for free over here. Later that year, she won our Unearthed songwriting workshop competition, spending time honing her already impressive songwriting skills with Gotye and Adalita. We don’t need to tell you what’s happened since: ‘Depreston’, ‘Nobody Really Cares If You Don’t Go To The Party’, ‘Elevator Operator’ and ‘Pedestrian At Best’ all scored big in the countdown this year, showcasing Barnett’s abilities as a polished, intelligent and witty crafter of lyric, melody and everything in between.

2014 was a pretty huge year for both of these budding superstars. Japanese Wallpaper was our 2014 Unearthed High winner thanks to his complex, beautiful, cinematic electronic songs, and Airling took her sultry, breathy pop songs to Splendour In The Grass as our triple j Unearthed comp winner. Last year, they combined forces for ‘Forces’ – a statement song that captures the talent that drips off of the both of them and bottles it into four extremely pretty minutes. Expect heaps more bliss bombs from this exceptional pair moving forward.

“I think we put a demo up and then we were the Featured Artist on Unearthed and then we had a manager and a booking agent within the space of the week.” – Alpine, chatting to Unearthed a couple of weeks back. The Melbourne six piece released a triumphant second record this year in Yuck, containing ‘Foolish’ – which made it to #57 in the Hottest 100 of 2015. It’s been seven years since we first discovered the band – then called Swiss – on triplejunearthed.com, and over the years they’ve become some of the most captivating, vital songwriters and energetic live performers in the country. ‘Foolish’ packs all of that into one breathy, summery kiss, and showcases exactly why Alpine are hugely deserving Hottest 100 entrants for this year. Read their Feature Artist interview from way back when on the band’s Unearthed artist profile.

Rufus played our Unearthed Digital Radio launch party in 2011 on the back of a couple of highly successful uploads to triplejunearthed.com that you can still get for free – ‘Paris Collides’ and ‘We Left’. Back then, Lewi McKirdy described them as “instantly infallible”, and the band has struggled to put a foot wrong in the last six years. Their second album Bloom was featured on triple j last week, and they made two appearances in the Hottest 100 of 2015: ‘Like An Animal’ at #28 and ‘You Were Right’ at #12. Given the overall strength of Bloom, maybe you’ll be hearing Rufus in the Hottest 100 of 2016 next January as well.

This year marked Ngaiire’s debut entry in a Hottest 100 countdown, but we’ve been on her music for a long time here at triple j Unearthed. The Sydney songwriter was an Unearthed Feature Artist back in 2010, was one of the winners of our NIDA Music Video competition, and you can still hear some of her tunes on her Unearthed profile. “She knows how to carry a song”, Richard Kingsmill said in 2013, and that’s more than true of her Hottest 100 breakthrough ‘Once’. Co-written with Paul Mac and Megan Washington, it’s a total neo-soul grower that showcases her nuance and control as a vocalist, over delicate, intricate production. Simply, it’s pretty beautiful – and clearly you loved it too! It came in at #73 in the countdown this year.

Vallis Alps were one of our Unearthed J Award finalists for 2015, and earned the #27 spot in this year’s Hottest 100 for the chilling, celestial ‘Young’. It’s a song that came to us out of the blue 12 months ago, and it captured attention, imagination, and hearts from the moment we heard it. Download it for free here and follow their journey from start to the Splendour mainstage with a lil video we put together down below:

No need to introduce ur boy Harley Streten. Flume’s one of Unearthed’s biggest success stories, turning his warped, trademarked electronic sounds into an international commodity over the past few years. The Sydney beatmaker uploaded his breakthrough tunes in 2011 (you can still get them here), was our 2012 Field Day comp winner, and has become one of the biggest names in electronic music at the ripe old age of 24. This year, ‘Some Minds’ hit #24 in the Hottest 100 as the lead single from his highly anticipated second album Skin. It marks a deliberately different sound from 2013’s self-titled debut, suggesting Flume is going to continue to push boundaries in 2016. We’re excited for what’s next.

Did somebody say dream team? Asta and All Day hooked up for ‘Dynamite’ - one of the most karaoke-able tracks of 2015. Their Unearthed stories began in the same year – 2012 – when Asta was named our Unearthed High queen and All Day put out a song that we guess you could say was ‘So Good’. ‘Dynamite’ takes their individual strengths and puts them both in a position to shine: Asta’s vocals are soaring and Deezy’s raps are witty and lackadaisical as ever. Get some of that magic via their stripped-back, guitar/vox Like A Version below: