The Best Tracks of 2017 (so far) according to our Super Users! 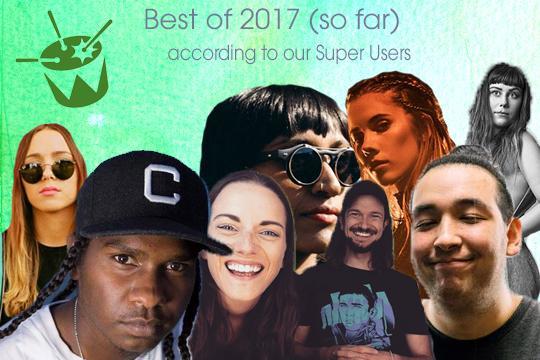 It's often said that our team of Unearthed Super Users are to uncovering incredible new Australian music what Inspector Rex is to being the best damn mystery-solving canine on the planet. Much like Rex, our Super Users are always hungry (for new music), extremely dedicated (to Australian music) and if they dig any holes in the backyard, we make them sleep outside.

When it came time to handpick some of the best tracks uploaded to Unearthed so far this year, we turned it over to our favourite pack of wild tunehounds, who've written some (p)awesome recommendations for you below. These are the Best Tracks of 2017 (so far!), according to our Super Users! They're all available for you to dig into right here on triplejunearthed.com!

As its title suggests, 'Happy New Year' arrived just days into 2017. It felt like something new, something bright and hopeful emerging from total darkness. In a lot of ways, it still feels like that. Lonelyspeck has a remarkable ability to plunge their listener into the depths, and yet always have that glimmer of light shining down. From the first whispers of pan flute to the chest-rattling sub-bass, “Happy New Year” is captivating, ethereal and simply beautiful. – David James Young

It’s a full thickshake downed in one suck. The vocals never lack for strength, and the band makes constant effort to ensure the arrangement is covering new terrain instead of trope. It's as scary and intense as a clown car going the wrong way down the highway, and I'm very brave and not even scared of clowns. – Mitch Alexander

There’s something so irresistible about the way Nyxen crafts all her songs to be both endlessly summery and effortlessly hypnotic. A perfect companion for her pulsing 2016 offerings, ‘Is It Love’ dives into the world of serene, sun-bleached house, complimented by the producer’s own polished guitar skills. It’s a sophisticated take, flaunting Nyxen’s ability to craft songs that work just as well at the beach as they do by the bar, and guaranteeing eternal holiday vibes for anyone who listens. – Debbie Carr

Mesmeric and melancholic, ‘Soldiers’ is a polished slice of atmospheric electronica from Rat and Co. “All these minds / Are broken / Into space and oceans / All these minds are blinded by emotion”, vocalist Liahona sings, crafting a delicate narrative describing a war at the end of human civilisation. Steadfast beats drive the track forwards, hinting at a relentless march of soldiers, and the dense instrumental soundscape is texturally reminiscent of Boards of Canada and Shlohmo. 'Soldiers' is a haunting and compelling release that draws you into its depths with each listen.  – Delia Bartle

It’s tempting to think of “Prey” as a respite; as sanctuary from the beautifully overwhelming noise that’s come to define Sydney sensations Rackett. That rising guitar creeps up on you like a villain in a 90’s kids TV show, a false threat designed to entertain rather than terrify. It’s punk you can dance to, it’s fierce and fun and an absolute belter of an addition to an increasingly impressive discography. – Jack Montgomery

Olympic Sneakers is probably the most unique song I’ve heard this year. Heaps Good Friends have craft layer upon layer of bubblegum pop, intertwined with fast beats, stellar vocals and some spot-on one liners like: “toiler paper on my shoe? I’m saving it for later”. Pacey as it is, not once does it feel too busy or rushed. This really doesn’t sound like anything else on Unearthed in 2017. – Emily Mathison

I must’ve listened to this song at least once a day since its release in May and am still not over it, ironic, considering the whole premise of the track is getting sick of the same things happening every day. ‘No Other Way’ encapsulates the experience of living in a small town and wondering what else life has to offer, - and incredibly relatable sentiment for anyone from a small town with big dreams. It’s super warm, infectious and oozing with energy. – Georgie Wilkie

No, that’s not a typo. This effervescent pop banger is packed with a potent amount of sass that’ll get all of your respective parties started. The vibes of ‘Sassaparilla’ are as bubbly and fun as the artist herself, so (if you crave a sugar rush) take a sip of this damn fine mixer from MUKI. – Michael Chow

When Baker Boy dropped his track Cloud9 back in May, he laid the kindling for what has the potential to be a fiery career in Hip Hop. Already a lead artist for Indigenous Hip Hop Projects working with students in remote communities and an original member of dance sensation Djuki Mala, Baker Boy mixes English and Yolngu Matha Language on ‘Cloud9’, representing his Arnhem Land families. The chorus, featuring teenage vocalist Kian, are as smooth and feel-good as they come. What a tune. – Rhys Thorpe

Listening to 'This Evening' for the first time was a disarming experience. The electronic elements I expected to hear don't appear until halfway through the song - leaving me face to face with a piano ballad equal parts dark comedy and grim as hell. And when the synths finally come in, you get taken away. – Spencer Scott

As a big ol’ stan of Santigold and M.I.A, finding Clypso on Unearthed gave me heart palpitations. I was fortunate enough to see her play YOLO at a small live show earlier this year and it was too bloody fun. It reminded me of watching Tkay Maidza play the opening set at Splendour back in 2015 - those who witnessed it knew she was on the brink of something big! – Kritty Barker

Take a second to think about exactly what you were doing at 17. Now take a listen to ‘Famous’ by Newcastle singer/songwriter Grace Alberhart and slip into an existential quarter life crisis. Grace’s debut upload to Unearthed is broody, catchy as all hell, and an unapologetically honest piece of songwriting. It’s more than just fuzzy indie pop: it’s a sly comment on the way we’re valued in relationships and the materialistic attachment that seems to go hand in hand with connection and commitment. – Laura Kebby

I’ve absolutely FALLEN for Swindail this year. He's got that bouncy jazzy jam on lock on ‘C’est La Vie’, uploaded to Unearthed earlier this year. With tight production, crispy-snap beats and oozy golden synths, it makes my body thump like nothing else. I’ve also fallen for his silly mug in every promo photo I’ve seen (`￣ω￣´) – Pip Rasmussen

Arno Faraji has graced us with eclectic hip-hop dance vibes on ‘130 Ego Jump’. The song executes a catchy, electronic beat in the most humble way, leaving this Perth producer’s talent to shine through effortlessly. You won’t be able to remember when you started bopping along, and you also won’t ever want to stop. – Julia Sansone

Same script? Sure, if it’s the script Tupac, Kendrick and Briggs have all been reading from. Ziggy Ramo has learned from the best, fusing pop and hip-hop in order to deliver this delectable track.  Following last year’s ‘Black Thoughts’ and ‘Black Face’, Ziggy has gifted us a song that is as catchy as it is thought provoking, and could rival anything coming out of the US at the moment.  It’s so exciting to see young artists making use of this platform to ensure their voices are heard. – Kate Carnell

What happens when you smoosh 1/5 of The John Steel Singers together with the queen of Little Scout? Magic. That’s what. ‘I’m Still Here’ pulls back while others charge ahead and while it might seem like a format of retreat, it becomes the song’s greatest advantage. Controversial opinion: it’s a better ‘I’m Still Here’ than Snoop Dogg’s ‘I’m Still Here’. – Jess Gleeson

Every part of ‘The Feeling’ is there for a reason, and not a moment is wasted. Dewy, slippery synths rise and fall in tune with the song’s lyrical message, as Eilish’s crisp and impactful vocals glide over the top. This is a triumphant, beautiful and sensational Australian pop song and a song, and I’m not going to be forgetting about anytime soon. – Isabella Moore

Stella Donnelly’s Mechanical Bull is the kind of debut that makes you remember just what it is you love about music. It’s sparse and deceptive in its simplicity, hammering home everything it does display with dangerous accuracy. Standing up as the West Coast’s answer to the East’s Courtney Barnett or Jess Locke, Donnelly is lyrically sharp, unguarded, honest and uniquely Australian. – Dave McCarthy

This is probably one of the most emotional tracks I've uncovered on Unearthed this year. It also happens to be a pretty pleasant, jangly bop about a chair. The debut track from RAT!Hammock is two minutes of warm, guitar-driven indie pop that fringes on the borders of lo-fi. I haven't determined if and what metaphor it canvasses just yet, but consider me well and truly charmed by this Melbourne 4 piece. – Rochelle Flack

I am seriously so impressed by Woodes. The fierce vocals and fiery percussion represent a departure from her previous work, like ‘The Thaw’ from 2016. But it’s a departure in the best possible way. What a song. In my opinion, it’s her strongest release to date. – Patrick Hong