The Dirt : Getting your start in the music biz 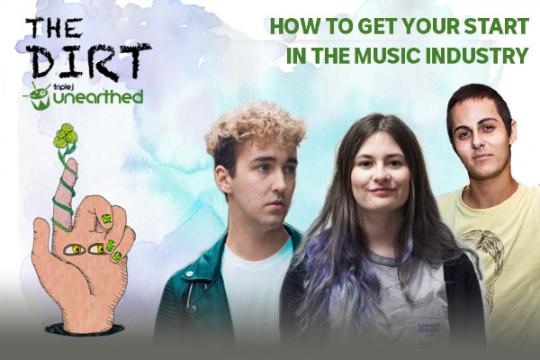 We’ve spent this past month trying to track down the best high school age artists during Unearthed High 2018. But what about if you’re a young person who wants to work on the other side of the music business? Where do you even begin if you wanna be a booking agent, manager, radio presenter or any other industry cool cat?

triple j Unearthed's Claire Mooney tracked down three young top guns who all started kicking goals in the music industry while they were still in school and DEMANDED to know how they did it. Georgia Cooke (Remote Control Records), Nic Kelly (Night High Records, Project U) and Dom O’connor (Laneway Festival, Mushroom Music) sat down with us to tell us what their teen secrets to music biz success.

So here we go- what’s the best first step for a career in the music industry?

Nic Kelly has been collaborating with EMI on his own record label for several years now but his big moment came when a song by the band Years & Years that he loved wasn’t getting any attention in Australia.

“It was going reasonably well in the UK… but I started a campaign called '#kingwatch' to make it a big deal in Australia through my blog and through social media to get this song to the position it deserved to be… It eventually got to #3 and then EMI music, they hit me up”.

They asked Nic if he wanted to run his own record label, all because he was out there successfully championing the music he loved.

Find a friend making music and help them out

If you’re just starting out, you might not yet know any industry bigwigs who can hook you up with an internship or a job. If you wanna get their attention and learn some important skills though, there’s no better way than by doing. Georgia reckons that one of the best first steps is finding a friend in a band and helping them out.

“There are so many other things you could do… If your friend has a band and you think they’re awesome and you want to try and make them famous, just ask to help them. Selling merch at their table at any gig, or helping them upload songs onto Unearthed or doing PR yourself”

Your first gig might be managing your mate Gary’s new band and that’s a fantastic starting point to learn the ropes of the music industry.

Be ready to volunteer but don’t get taken advantage of

Dom O’Connor works at both Laneway Festival and Mushroom Music now but most of his early work in music was unpaid. He volunteered at community radio doing all nighters which may not have been glamourous but it was a big step in his learning process.

“Don’t be afraid of doing things for free when you’re starting out… When it comes to working for free you have to weigh up the benefits of how much am I gonna learn doing this role and are they just taking advantage of free labour. If you’re learning something you wouldn’t be able to get elsewhere then you gotta weigh up whether its worth it or not”.

Noone wants to be doing coffee runs and data entry for free but if there's something important you can learn, it might just be worth it.

Get involved in a community group

Georgia Cooke works at Remote Control now but her earliest experiences in the music industry came at only 14 years old. She started putting on gigs for herself through a community group called FreeZa.

"From that… I got involved in The Push [who run FreeZa]… and I was paired up with a woman called Lorrae who worked at Remote Control and now I work there!”

Get out there and start doing your own thing

The common theme with everyone we spoke to was that they didn’t wait until they had an official role or big online following. They were tweeting, writing, making radio, booking shows, sharing songs, curating playlists and getting involved on their own. You don’t have to wait to be asked to put on your own gig and it couldn’t be easier to start a music blog online.

If you’re at school, keep focusing on your studies but don’t hesitate to start your first music project!

If you're looking for more guidance on anything from Music Publishing to Getting a Grant or Venue Booking? Check out some of our previous instalments of The Dirt.

And remember: You got this.