The Dirt: How to combat Writer's Block 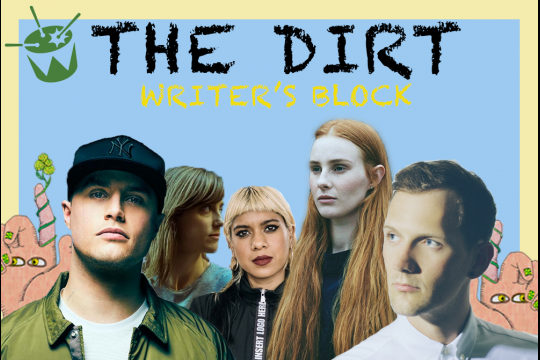 Bunkering down for a writing sesh can have its highs and lows. And it’s hard not to feel bogged down by the lows. That’s why we hit up a couple artists who 100% get you. They’ve been in your position before and found a way to combat writer’s block. Acts like ILLY, Vera Blue and In Hearts Wake share their secrets on how to bust down the door that’s blocking your creativity.

Wise-guy The Kite String Tangle is all about shaking up your routine and making a conscious effort to hang out with different people or even listen to different music. He reckons that’s a good way to trick yourself into thinking differently about what you’re currently working on.

“Revisit some really old music, stuff from the ‘50s or ‘60s or ‘70s that you’ve never really heard before. Find a subgenre that you’ve never heard before and explore it. Try and see what was really cool about it and recreate it in a modern way or in the exact way that they did. Set yourself little challenges, it can be really fun but also very fruitful.”

Byron lads In Hearts Wake back that up. Their idea of a shake-up is taking things outdoors. “Ben and I would go surfing every morning and I think a big part of it is getting outside of your head and getting perspective on what it is that you’re doing. The number one place for perspective is getting into water, even it’s a bath or a shower, it really does help ground yourself and get out of your head.”

And so she made an effort to create a judgement-free zone for herself which helped the Sydney-based artist get over the finish line. “When you’re writing songs it’s hard to not judge yourself a lot. You can be really judgemental. I overcame writer’s block by relaxing, being mindful, going for walks, and just being kind to myself.”

Sometimes it’s as simple as revisiting old ideas. That’s what helped In Hearts Wake combat writer’s block. “Always save your ideas and keep them down on bits of paper or on files on your computer because you never know when they could spring back to life.”

While writing their album Arc, they surprised themselves with what their old ideas could bring to the table.“Funnily enough, the fourth track on our latest album, I actually wrote well over a year ago. I wasn’t happy with it so I left it and ended up coming back to it. We were a few months out from recording an album, and I opened up the session, rearranged the whole song and wrote parts. It turned out to be one of the singles.”

Don’t listen to those whispers in your head! Ecca Vandal says a big, fat N O P E to any kind of pressure. “One thing I found worked well is just blocking out the noise that is around you, whether it’s voices, opinions, pressures. It’s really important, cos I don’t think pressure is conducive to productivity.”

Melbourne artist Jess Locke is with her 100%. “I’ve definitely experienced anxiety over writing – I think maybe it comes from self-imposed pressure. Wanting to have something and then not so much being able to enjoy the process of doing something and thinking too much about the end product. I think I’ve found that that’s when it ends up being counterproductive or blocked.”

Perhaps by now you’ve realised writer’s block is way more common than you originally thought, hey? ILLY is as open as you can be about how it’s hit him on “pretty much every album” and views it as a natural part of the album writing process.

“When you’re in the middle of it, it can seem like it’s never gonna improve which can be a bit of a bummer.” His way around it is to keep on keeping on. “It sounds so corny – but to believe in yourself enough that when you go through this stuff, to not lose too much faith. It does come back, you don’t lose it forever. It can be as simple as just having a word, a phrase in a conversation, just something that clicks. Then you find that inspiration and you run with it and then you’re back in the game.”

We believe in you. Now go finish up that amazing record!