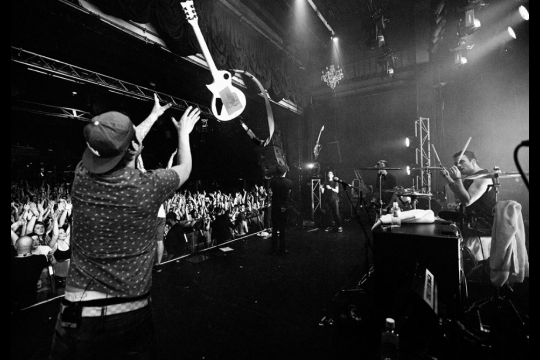 How did you get your start?

I used to be a sound engineer in a former life so I have a lot of friends in bands and the music industry. During my short-lived career of trying to start an indie label, I used to take my point and shoot camera to gigs to try and capture some photos for our website, I sort of fell in love with photography. In another career change after I got sick of sound and the label went belly up, I went back to study photography. My aim wasn't to become a music photographer but since all the people I used as subjects for assignments were in bands, I sort of fell into it. And of course I love it.

How important is equipment? You can spend a lot of money very quickly in photography.

Equipment isn't as important when you are shooting portraits, a basic DSLR, a nice lens and the knowledge of how to use it in manual is all you really need, but when you start talking live gig photography, it becomes a little more important. Because most gigs are in less than desirable lighting conditions, you need a DSLR camera that produces clean images using a combination of high ISO settings to keep your shutter speed fast enough to freeze the action and also a fast lens (low f-stop 2.8 and less) that will help you make the most of the available light. At most gigs you can't shoot using a flash.

Do you have much chance to enjoy the gig while you’re shooting?

I don't really have much of a chance to enjoy the gig in a musical sense as I'm focused on trying to get the best results from myself and the camera. So I couldn't actually tell you if a band played well etc. I do get a sense of atmosphere and vibe in a room though, so often I get a sense of a good gig through the atmosphere but not in a sense of how they played. I would imagine a good atmosphere means a band is having a great show though!

According to the legendary Australian photographer Tony Mott, this started with Chrissy Amphlett. After a few songs in and she started sweating under the lights etc her makeup would start to run so to make sure the media got shots of her looking fantastic, they would only let them shoot for the first 3 songs. This somehow became the industry standard. So unless you are shooting directly for the band, photographers usually only have the first 3 songs to shoot. Which is sometimes a bit hard as the best parts of a gig usually aren't in the first 3 songs.

Does it get a bit competitive down in the pit?

When it's a full pit, it's sometimes a little hard to move around, you really have to pick your spot sometimes and hope that the action unfolds in front of you. Most photographers are respectful to each other, letting people move around etc. Just don't stick your camera up in the air as there is most likely someone shooting behind you and they don't need your camera in the middle of your frame.

How much time do you spend working on photos afterwards?

The live gig shots, I try and process naturally, to show how it would have looked at when you were seeing the real thing. I like colour so I rarely convert to black and white. The portrait work has a lot more time spent on it depending on the image,  I like to work with many facets of the image sometimes it's the tones, other times, contrast and detail.

What has the invent of smart phones done to your business?

I don't think it's affected my business personally, I still work for a lot of companies that end up in print, so they still need the resolution and most importantly strong imagery that you can't do with a phone, i.e. depth of field, lowlight etc. I think where it has changed is the documentary side of being in a band. Bands can constantly keep their fans updated with personal insights on social media with content created from a camera phone, without the need for a third party capturing it for them.  I think the downside to this is that so many moments are being captured with mobile phones that we are going to lose the opportunity to see the images as large prints, the detail and quality of the image just won't stand up to being enlarged as a physical print.

What about press shots...a lot of them end up looking the same. Any tips for bands there?

A press shot is often the first time the public will be introduced to your band and their music. If your image gets passed over by a person browsing a website, they may never get to your link to hear some music. A good photo can be created using colour, repetition, negative space or the rule of thirds, all these are compositional techniques to help create something interesting. So if your  band isn't the type of band that wants to have something zany or outrageous, there are plenty of photography techniques to help make a photo stand out in a crowded sea of imagery.

For me a great live band photo is something that helps the viewer evoke a sense of what the gig was all about. Was it emotional and intimate or was it high energy with 10,000 people going crazy?

What is your tip for a great band press and publicity pic?

A great press pic just has to have something about it. Something that is going to make the viewer want to go and check out the bands music.  It's going to be different for every artist, you just need to find what works for you.

Anyone with a camera can take a good photo if they press the shutter enough times. The difference between a professional and non professional can be the time it takes to get the photo and the consistency. Do you have all day to try and get a great photo or do you have 30 minutes? A great photographer should be able to deliver great images consistently without too much fuss. They should also be able to take your vision (if you have the idea) and make it a reality using a variety of techniques.

How do you become an official photographer for a travelling festival like you have been with Soundwave?

That came about through previous relationships I had as a sound engineer. I have known the guys for years and they had been impressed with what I was doing with my camera, so when they asked me to jump on board, it was a dream come true. I always loved the legacy Tony Mott left with the Big Day Out so hopefully this is my chance to do the same.

Can you make a living out of it?

I make about 30-40% of my income from live music, but the majority of it comes from the portrait work I do. There just isn't the publications around anymore to run the live photos and reviews. Bands also don't have the budget or need for the images that they used too. There are many opportunities around to shoot for online websites and digital magazines but many of them don't pay their photographers. It makes it pretty hard to focus on live music when there are so many limited paid opportunities.