The Dirt: Loving Your Publicist 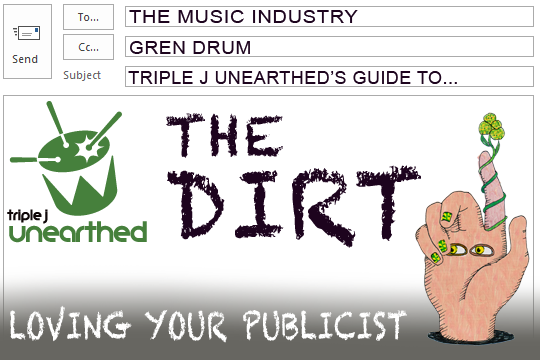 If you’re a young musician starting out in Australia, we reckon you might have some questions about publicity.

From the outside, it can totally feel like one of those ancient arts handed down through the generations from sensei to sensei – which is why we’re here to help explain it to you, yung grasshopper.

So, what is a publicist, and what do they do? Here's the hot scoop.

Genna Alexopoulos, who runs her own publicity company called Super Duper, reckons it’s all about acting as a middle person between artists and the media. She works with artists like Alex The Astronaut and Camp Cope and on events like VIVID Live and the Secret Garden festival.

“It’s our job to talk to the media about the artists we represent – and it’s a total honour to work with so many diverse artists that we believe in and care about,” she says.

Genna reckons that getting a publicist might be a good thing to do if you’re an artist starting to pick up a bit of heat, but at the same time, there’s a lot you can do for yourself:

“If your project is starting to get a bit of attention, it’s good to hand that over to someone who can help manage that landscape, and put you in front of the right people to help take you to the next level. In saying that, if you’re uploading to Unearthed, the first best thing to do is probably to send your music out to websites that you follow, and if you’ve got a show, to talk about your show, and it will all start to fold together.”

So – maybe you don’t need a publicist for your first ever song, but lots of artists will tell you that they’ve had hugely positive experiences working with Publicists who have come on board with a real understanding of their brand and vision. Here’s Sydney songwriter LANKS, talking about how employing a publicist has impacted his career:

“As an independent artist for my first few records, having an experienced team who knew how to service your music to radio and publications was really important. Especially because as an artist an as a management team we were fairly inexperienced back then – it was amazing to have someone to understand the vision and be able to communicate the message in a way that probably we didn’t have the experience or skill to do.”

Cool huh? But arguably the coolest thing is that you have the option to choose your own adventure when it comes to publicity. Eilish Gilligan sees both sides – she’s a songwriter from Melbourne who also works as a publicist during the day. She does her own publicity, which means she has lots of tips for people looking to take the DIY approach to getting their music out there:

“My experience is a little different because the first time I used a publicist, my publicist was … me,” she says.

"These are my main tips for young artists taking a DIY approach to publicity:

So that’s publicity in a nutshell. But how do you know that you’ve found the right one? LANKS told us that they’ll mostly just help put you in cool and interesting situations:

“I’ve learned that [great publicists] understand strategy. It might be better to put all your time and effort into a cool Facebook Livestream than in doing a print interview, although sometimes there’s merit to that too. People don’t care what I ate for breakfast this morning, and that’s literally a question I’ve been asked in interviews before. This morning I had muesli, fruit, and Soy Milk.”