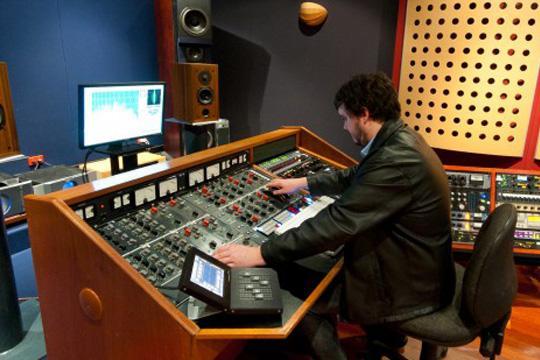 Mastering is the process of controlling and changing frequencies and dynamics in order to make your music really pop. Rosie Beaton chats to mastering engineer Andrew Edgson to uncover how you can get your music to reach its sonic potential.

What actually is the mastering process?

When a mix comes in you'll listen to it and based apon what it sounds like you'll make a decision on how to process it. It is very strategic on how you master, and that varies from song to song. On the first listen, you will have a clear idea of what needs to be done. Things that are usually done are 'EQ' or equalization, so changing the frequencies, wether you need more bass, treble or mids or less of any of those. Another thing to do would be control the dynamics, you do that through the use of a compressor. Another thing is to make the music as loud as it can be, without damaging the sound. Levels-wise you never want to distort anything, that would go against the aim of what you are trying to do to make it sounds as good as it can be. The aim of a mastering engineer, is to present a mix as best as it can be heard. You are trying to make the mix stand up across a varied number of formats, wether that be vinyl, CD, iTunes. A good mastering engineer wants to take your releases to their highest sonic potential. Mastering is the last creative step in the production process, it is the first manufacturing step, because you are making up the disc that goes to the production plant, or the files that get uploaded online.

How did you come to be a mastering engineer?

I started out as the assistant mastering engineer at Studio 301, and with that role I was essentially doing quality control, doing edits and things for some of the other mastering engineers. Over a number of years I developed my 'ears' in their studios and slowly started to bring in my own clients. The more experienced mastering engineers would take me into their studios, show me different techniques, just the art of listening, which is something that a lot of budding engineers should be concentrating on.

What are some of the bands you've worked with?

Matt Corby, Vance Joy, The Griswolds, 5SOS, Oliver Tank, Mark Ronson... My taste in music is really quite broad, I enjoy the varied nature of that kind of work, as opposed to specialising in one genre.

Do you master differently depending on the output - CD's, vinyl, online, live performance, radio?

Vinyl is a format you need to pay special attention to, just because of the physical limitations of the vinyl disk. If you don’t process it correctly, certain things can result in distortion. If you don't pay attention to the bottom end, the lower frequencies, you can actually get the needle to jump out of the groove. This is definitely not something you want to happen when someone is playing back the record that you have mastered. Mastering for online, and Unearthed is a great example of this, you need to be careful to not set the peak level too high, because when a song is encoded to an mp3, that encoding process can create distortion. Being a mastering engineer, the higher quality the better. I like a 320 Kbps mp3. When mastering for a live performance, like making instrumental backing tracks for a hip hop artist, I want the drums to sound big and punchy, so I will adjust my processing, to make that happen.

Was the technology transition hard from tape to software?

It’s an interesting one, instead of actually going from tape to software, I actually went the other way around. I started out with software at home when I was just mucking around in my bedroom. Once I got access to the studios and all the expensive gear, I was really able to get my hands involved with tape. They are both recording mediums, they are quite different, one is a physical medium, whereas digital is perfect every time. Tape can change the sound and how hard you record to it.

Some websites are offering DIY services for bands for cheap. What are your thoughts on those?

The technology that is behind this kind of website, it is all about averaging. What will happen is you will upload your song and their system will analyse it for you. Based on that measurement, it will create a setting, which will essentially average out the sound over the length of the song. Averaging out, generally leads to average sounding music. Mastering is more about making exceptional sounding music. A computer can't replace your brain or ears, it is difficult for a computer to think about something that is perceived subjectively. It is a space to watch definitely. If a young band was pressed for money and they were going to release music anyway, I'd use it to see what it sounds like? If it sounds better than your mix, great, if not, send it to a mastering engineer.

It often appears to be magic... Why do you think that is?

What do you get out of mastering?

Mastering is just like a puzzle, every track you need to approach differently, it has its own distinct set of problems. Mastering a track usually takes about an hour, it can be less but usually about an hour so I consider each song to be a one hour puzzle.

What are the "loudness wars"?

The loudness wars are pretty much based in this psycho acoustic phenomenon, whereby if you play two versions of the same mix, with one being just marginally louder, the person who is listening will always perceive the louder one to be better. This happens all the way up to the threshold of pain. Because of this, there is sort of a competitive nature between mastering engineers, record labels, artists, to make their song louder than the last one, in an effort to make it stand out from the others. The technology allows you to make songs loud, but only up to a point, after which the sound starts to distort and break up. The loudness wars are sort of like an evolutionary arms race, where everybody is trying to be the loudest and best sounding music out there.