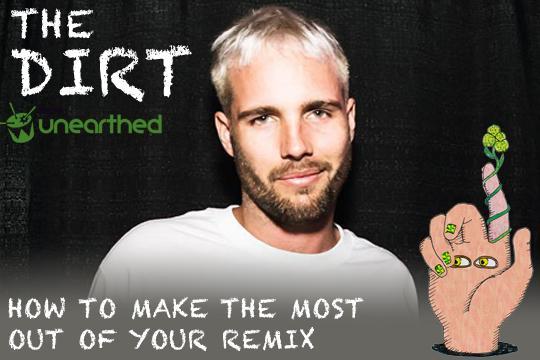 Been thinking about giving the ‘Homemade Dynamite’ remix comp a go? Production royalty What So Not’s here to give you that lil *nudge nudge* to get you over the line. He’s the brains behind already iconic remixes for Major Lazer and RÜFÜS so whether you’re getting your first taste of remixing or you’re a seasoned pro, What So Not’s here to give you 5 flame emoji pieces of advice for anyone wanting to give it a crack.

Hit play to hear What So Not chat about remixing tricks in full.

Test your skills out

“I think remixes are really the best way to start, particularly when you’re getting into music production. You’re already provided with a great foundation and the ability to take tiny little pieces and all the little layers apart very easily. Sometimes when you begin [remixing], you try and bootleg things and you’re a little more limited. But actually having the stems to such a high-quality song is a real advantage and can really help you get moving on something very exciting very quickly.”

Melbourne producer Levi Niha shows just what you can do, taking those little pieces and turning them into a beast of a tune, with exciting layers of production.

“Being yourself is such an important part of making music in general, and that can be very fun when it comes to a remix because it is obviously someone else’s work and you being yourself can be quite an interesting collaboration on whatever you are starting with there.”

It’s like that moment when Nhatty Man blessed our ears with this dancehall version of ‘Homemade Dynamite’, pulling the song into an entirely new genre-world.

“Make sure you spend the time to review the stems and see what is available. Often there’ll be something that just instantly connects with you again that you might not have found just by listening to the original as its own piece. It’s a really great way to find hidden gems and spark something that can be a really core component of your final piece of work.”

That could be said about how South QLD production duo Nine Year Sister approached their remix, structuring their chorus around one word only. Spoiler: it’s a party, alright!

Flip it & reverse it… don’t be scared!

“Using very interesting processing on sounds to turn a voice into a guitar, or to turn some foley and background noise into a chord progression, and then take it on a whole new adventure of what that can really be and sound like.”

“It’s so important just to really have fun with it and don’t stress out on what you think it should be. You might’ve come into it thinking you wanted to make the remix in a certain way, and you’re working through it and you really like what you’re doing, but it’s not anywhere in the same ballpark of what you thought it was gonna be, and that doesn’t matter.”

Remember our Hermitude remix comp winner Ok Sure? She’s back, and has given us her take on ‘Homemade Dynamite’, sticking to the Ok Sure style that we know and love.

As a seasoned king of the remix, What So Not’s advice to budding remixers to trust yr gut couldn’t be more on point. “Whatever happens in that moment and in that session… that is probably the best direction for you to head in,” he says. “That’s your initial instinct on how to do it and that’s what you should really follow through with.”