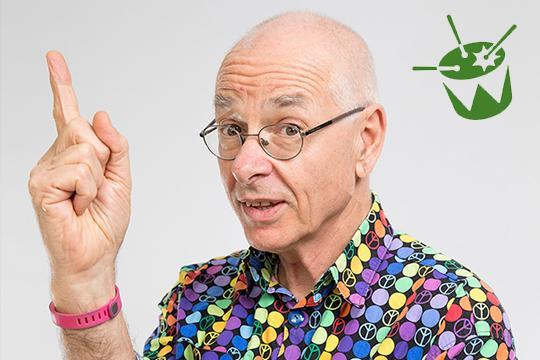 It's Science Week all this week!

To celebrate, we recruited total ledge & Aus music lover Dr Karl to give us his hot takes on Unearthed. Catch him analysing 5 songs while getting deep into the definition of conscious thoughts, exploring pH balance and how deathcore channels the darker side of even the nicest person.

His scientific evaluations of the tracks below. Lil' language warning for the show, too!

“In their picture they’ve got a bit of sticky tape over their nip nips. They’re really hard, driving, catchy punk and you wanna dance. One of the good things about it is if you’re dancing you’re doing some exercise and you’re burning up that cholesterol.”
“There are good cholesterols and bad cholesterols. There’s one family in Italy who have incredibly low cholesterol and they all lived to be 100+. So it does seem high cholesterol of the bad sort can be bad for you. I just like the fact that this song makes me want to dance.”

“I’m trying to find out where in the song she’s talking about pH balance and I’m guessing she’s not. Is this some sort of sarcastic yet witty diatribe against man’s human and humanity to man and that fact that everybody’s conned into believing that your body is acidic and the only way to make it less acidic is by having more acid, or is she talking about true love? I don’t know but I think it’s a wonderfully beautiful, haunting, lovely song.”

What a big target he’s taking on, conscious thoughts. What is consciousness? We don’t know. Is free will real? We don’t know. So he’s saying ‘Okay, here I am. I’m from Kenya. I’ve come to Australia. I’m a bit alienated. I love where I am but there’s the alienation thing.’ And he does this rap thing where he tries to envelope where he comes from and where he is and how much of it is conscious and unconscious? Man, Mr. Promise is hitting one of the big issues of our time, what is consciousness?  Looking forward to hearing his next thing on philosophy as well.”-

“Squidgenini is speaking for many people. Her lyric there, the repeated chorus ‘leave me the f*ck alone’, what’s she saying? There is so much in our world, where people with power – political power, religious power, economic power – are using that not for good but to be mean to other people. And what she’s saying is ‘You’ve got some power over me, ‘rack off outta here, get outta here hairy legs. If you’ve got some power use it in a better way’. Big it up for you sister!”

Of course you do know the conspiracy theory that the world’s politicians and leaders are in fact shapeshifting reptilians. So what we’re getting here is kind of the dark side of Eurovision. I’m thinking that Reptilian Civilian are doing this sort of double level thing. ‘Here are all the dreams and bad things that you wanted to have but only as dreams. You never wanna do them in real life, and here it is I’m gonna give it to you, let’s eat some babies for breakfast right now.’ I’m kinda thinking that’s what they’re saying in the lyrics - not that I could actually find the lyrics. I love the song to pieces apart from the fact that I couldn’t understand any of the words because it was so guttural, and there’s some part of me that I wanted to have expressed through it that I do not want to ever do in real life, but as my secret fantasy I feel better for having done it.