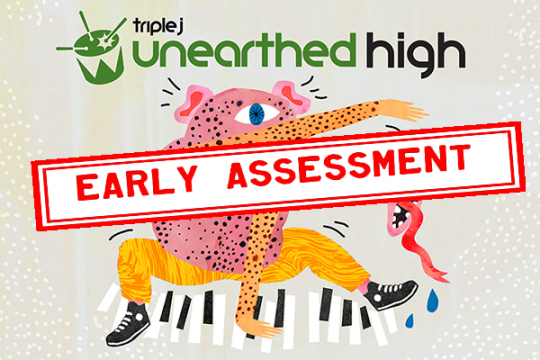 Call it an extended #FarajiSeason, or maybe you can credit the rise of artists like Baker Boy, Mallrat and Sampa The Great through Unearthed over the past few years – hip-hop is arguably now the most prominent genre for talented new Australian musicians entering Unearthed High.

He’s a self-described “16 year old doofus brain that's highkey in love with speaking rhythmically”, and heads up, he’s really good at it. Tracks like ‘dam I got a cold’ and ‘yeesh’ put his advanced rhyme schemes on the mantlepiece; it’s sophisticated, smart, and incredibly fun.

On that downbeat, Mallrat x Travis Scott tip. “You’re too cool for me, baby,” she sings on new one ‘POOR TREE’ – but tbh, it’s fake news: this is a hypercool, incredibly current, trap-hat rap track.

Buss it down, one love! His songs are thick and smooth, like custard, recalling 6LACK, Future and Roy Woods. There’s emotional depth and resonance there too, if you like your raps served with a side of feelings.

One for the Ty Dolla $ign fans. It’s gospel and bedroom and hip-hop all tied up in this one really fascinating project. Bet this dude is gonna feature on like, everyone’s new song.