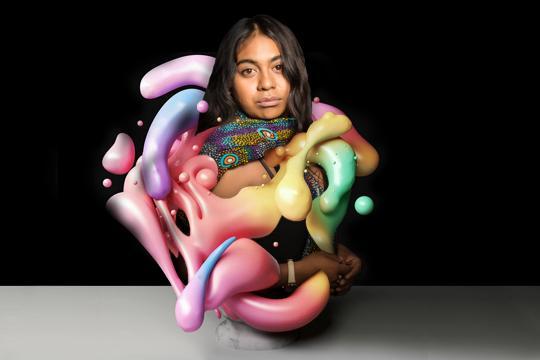 Here at triple j Unearthed, we’re proud to support and champion great Australian Indigenous artists every day. This National Reconciliation Week, we’ve been shining a spotlight on important rising Indigenous acts, and even bringing some together to make great new music.

Back in 2015, we paired up two rising Indigenous artists to collaborate on an original track for NAIDOC Week. DENNI and J Award nominee Kuren smashed it out of the park with the enchanting ‘Wolves’.

This year, for National Reconciliation Week, we tapped 2016 BIGSOUND comp winner and 2016 Feature Artist Emily Wurramara and Northam, WA producer Steady and they made magic ‘Together’. Literally. That’s the name of the song.

The pair had just a couple of days to put a track together, a challenge for Steady, who says he hasn’t worked with vocalists much before.

Collaborating on-air with Veronica and Lewis, Steady delivered three beats for Emily to choose from, and she was won over by the whistle in the third option.

Inspired by the 2017 NRW theme ' ‘Let’s Take the Next Steps’, Emily says she wanted to write  “something to do with moving forward together and joining together to reconcile”.

We'd say she has. The result is a unifying anthem, Emily’s warm vocal sailing over Steady’s earthy, piano-laced beat. The whole track is grounded by the powerful lyric “The river is the river / the sea is the sea / can we join together?” It’s a spine-tingling song that galvanises the message of reconciliation. Absolute goosebumps.

Listen to the track below, and leave it a rating and review.