FAR OUT on triple j Unearthed 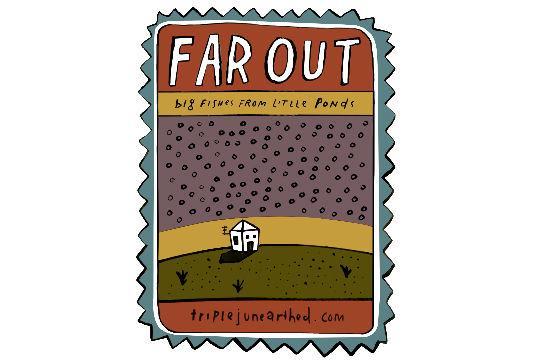 triplej j Unearthed is going Far Out; celebrating the big fish in some of those smaller musical ponds.
From bedrooms in Broome to smelly sharehouses in Newcastle, these are the best new sounds being made outside the “big smoke” across triple j and Unearthed:
Meet Black Summer. He's an eleven year old EDM lord from Canberra. He says he's been making music for "about six years". When we found his songs on Unearthed, we drove to the nation's capital to get to find out more. You definitely want to know about him.

Steph Hughes caps off Unearthed's trek around the country with an hour of absolute power from all over this sunburnt land. Cop dreamy electronica, sharp hip hop from Cloncurry and dive into the lo-fi bedrooms all around the nation.

Our Feature Artist has been plucked right from the centre of Australia! Renowned sax lover Edward Francis is coming to you direct from Alice Springs with his hauntingly beautiful future soul music. Meet him below:

Here's the view from Edward's backyard:

We're also letting Unearthed artists give you an audio tour of their local music scene in over 30 different spots around the country. You'll visit Port Pirie, South Gippsland and plenty of other far flung treats in between.
We've been enamoured by 17yo musician Yura since she started uploading her her super lo-fi creations to Unearthed out of her bedroom in Broome last year. "Making music was mainly done out of boredom at first because I had no friends and I couldn't - and still can't - stand the heat!", she told us on her school lunch break last week.  Cop her two musical projects - the "$30 guitar I bought off my friend" led ~teen cult~ and her unintentional side project ~dream disorder~ below.
Polo Prince is a mysterious and very special Novacastrian who loves memes and makes cloud raps from his smelly, sharehouse bedroom. His Facebook page has drawn some big steeze - over 130 likes and counting - so we took the opportunity to ask him about the haters that follow on from such immediate success:
Mt. Isa hip-hopper Lucky Luke makes socially conscious raps from the sunshine state. He saved up for more than a year to record his debut album, and told us all about launching '1 Day',  the first song to come from it:
"I’m from Cloncurry, North West QLD but I currently live and work in Mt Isa which is about 130km away from the ‘curry’," he said. " Out here in the North West there’s kind of a small hip hop scene but on a scale of people getting their music recorded professionally there’s not too much because of the remoteness. '1 Day' is the first single off my debut album, Whichway, and a funny thing about this song is that it almost didn’t make it to my album because I wrote it to a different beat and it had a totally different vibe which was depressing. One day I came across this beat and the rest is history...”
Hear '1 Day' below:

Kids At Midnight is the project of South Gippsland legend Jane Elizabeth Hanley. Her new song 'Survial' is a total beaut that shows off her coastal roots.

I come from a small little coastal town," Jane said. "The clichéd, rugged, windswept cliff tops where you can stand and stare out to oblivion and dream your life away basically. It’s really amazing inspiration for a songwriter and it turns out pretty good surroundings for a producer as well because you have a lot of time alone to work on your craft in your studio - which is my bedroom. There’s not a huge electronic scene in the area so you really do have to come into [Melbourne] to play gigs, but that’s cool. This is my new single called ‘Survival’ and I wrote this because at the time I was watching a lot of anthropological documentaries – I’m a bit of a nerd – and I was really intrigued by the theme of certain species of humans dying out because they hadn’t evolved. I thought that was quite a beautiful but sad idea and I could kind of relate to it so I wanted to write a song about it."

There's always plenty happening at Unearthed as we continue to go Far Out right through the year, so keep your eyes across triplejunearthed.com to start discovering some our best hidden gems!