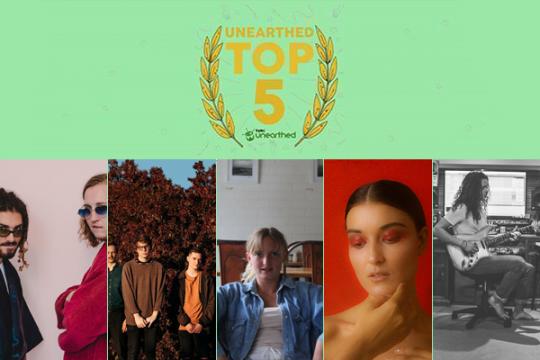 It's Friday my sweet digital children, so you know what that means! Time to whittle the week's releases down to just the five that you simply must listen to or else you might Explode and All Your Guts Will Be Everywhere, yuck.

So knowing that, here are your two options. Click here to listen to the triple j Unearthed podcast to hear the five songs played in full and discussed by professional Song Discussors OR read on...

Milan Ring - Say To Me

Right then, what more to say about an artist we've been raving about endlessly through 2019? She's does that thing which James Blake does (and no I'm not talking about dating Jameela Jamil) in that she makes songs which bang hard but are undeniably beautiful. Hers fall more closely to R&B by virtue of her lyrical salt and velvety throat, but shes reknowned as a masterful producer, songwriter and vocalist and this new one is only going to further than conception.

These two Western Sydney bois shared a studio with Kwame for a number of years before he presumably built his own studio space in LA using several bricks and only his abdominal muscles and maybe some sound muffling foam because he cares about his neighbours (a very nice man). Sorry, yes Korky Buchek, they've done songs with the likes of Kwame, Kymie and Lauren, some of Western Sydney's best new voices in hip-hop. At their heart, these dudes just wanna make songs that make you wanna move and their new one nails the brief. Let's bounce.

Sam Windley - For Real This Time

Sam Windley what the actual hell, where did this come from!? Her bio tells that she's based on the Central Coast in NSW and her music tells me she's a damn genius. What a melody, what a voice. This is going to billow round my head like that plastic bag in American Beauty and I'm just gonna let it. She's also clicked the 'Unearthed High' box on her profile so we can safely presume that she's 18 or under too... 2020, remember the name right?

Jules is a full package producer with the capacity to play at least a million different instruments. Seems like a lot? That's because it is, this dude is beserk talented on the performative side of things but as a producer he nails those sounds AND those decisions. Like the choice to bring in KYE on the vocals and RAIZA BIZA on the bars? Inspired. If those names look familiar it's because KYE's single 'Company' has been a mainstay of Unearthed radio this year and RAIZA BIZA is the kiwi rapper with whomst Remi dropped a collaborative EP last year. Get on this one for the vocal parts, stay for the strings and the groove.

There's a million emo references I could draw out from the 2010's that'd be perfect for a record like this but I'mma speak the common tongue here with a name we all know and love: Slowly Slowly. If you like those Melbourne feelers then suffice to say you're gonna get a kick out of the new one from Waxflower. They're a Brissie four piece who've put the hours in touring throughout 2019 and with every release they come more into their own sound and sense of self. This one rips, have it.