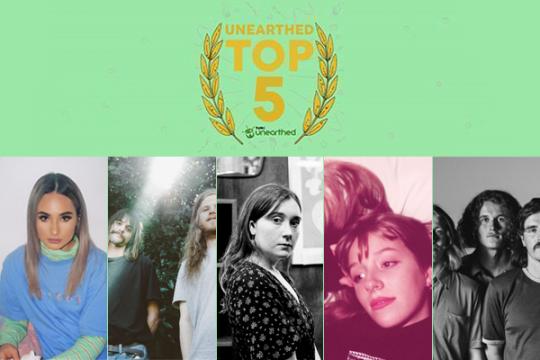 Hands up if you're keen to hear the five best songs uploaded to Unearthed this week? Wait, no? Why'd you even click this link then? Well I'm gonna give 'em to you anyway. Here we go.

If you wanna hear the lot of them discussed this week tune into the Unearthed Podcast!

This week: A remix comp finalist, an Unearthed high finalist, a NIDA comp winner, an indie-rock dream and a song that'll blow you away if you're a Blink fan.

Starting a song with "I'll be honest with myself... you suck" is a bold move and fortune for AJ it's paid off in a big way. There's been plenty of heated discussion around the Unearthed office about whether or not this is the best song she's ever made and it's divided, but only because she's got a killer catalogue of tracks to her name already. Wonderful voice but it's really all about that songwriting.

How does someone so young have this much confidence? Maybe we've got it all wrong and only someone this young can have that sort of confidence? Whatever the case, Unearthed high 2018 finalist Yergurl is proving that she's got the goods to deliver on the potential she demonstrated through that competition. This is the first brand new song she's released since and it's showing fuller production and a thicker sound to compliment the hyper-modern songwriting and vocal textures she's known for.

Three friends making pop-punk from Rockhampton, QLD and it's making us ask ourselves whether we might be in the midst of a Blink 182 revival? Between this song and the most recent single from labelmates Dune Rats, there's some definite Tom, Mark and Travis energy in the air and we're feeling it. Bratty, energetic good times with a chorus you're gonna wanna scream back at them live.

Prepare to start moving your shoulders in circles, biting your lip a little bit, nodding your head even? This one's as cool to the touch as an ice cube and just as slippery. She's more a songwriter and vocalist, DVNA is also a tried and tested producer whose remix of DMA'S' 'The End' earned her a spot as a finalist in our 2018 remix comp. Spoiler alert... new remix comp soon?

If you've got a hankering for some good, honest, indie-rock then mash that retweet button dawg, this one is for you. Gerringong lads Pacific Avenue uploaded a pair of songs this week and the pick of the two is 'Something Good'. It sounds like where they're from, a coastal record with guitars and energy but no hard angles. Get in there!