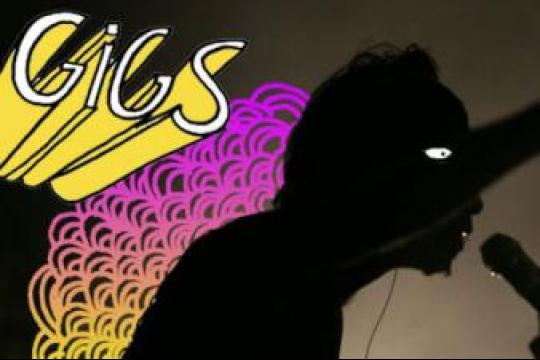 “Literally get out there. If you’re from a big city, look outside the scene and approach suburban bars and clubs that put on live music. It’s a really character-forming step for any band, because those crowds won’t care about trends and scenes, they’ll react more honestly to the music you’re playing. And if you win them over, then you’ll know that you’re really onto something that’s good.”

“Try to avoid pissing off the band that you’re supporting. Don’t act like divas around them, don’t mess with their technical people and whatever you do, don’t vomit on their guitarist’s pedal rig. Pat from Grinspoon did not enjoy that...”

Don’t think twice about it, playing live is crucial. Not only is it one of the best ways to cut your teeth and gain experience, but gigging is also the backbone of the Australian music scene. And the best way to take advantage of that is to play as much as you can.

Cut Copy’s Tim Hooey confirms the importance of playing live, saying that “doing a lot of gigs really taught us how to actually be a band. Up until then, we were just messing around in a studio, not knowing how to play our instruments properly. That all changed once we started touring, and we’re so much better off for it.”

As you start to suss out your options, you will face a rather meaty roadblock in the form of licensing laws that limit gigs for underage bands. That’s not to say that since you’re under 18 you won’t be allowed to play at venues licensed to serve alcohol, there are just a few rules that you’ll need to adhere to. The laws will vary from state to state so speak to local government representatives and venue staff to get the applicable information for you, but in general you will need to stick to the following restrictions:

There are people out there who will want to help you, so don’t feel discouraged by these rules, just be direct and forthcoming with venue managers and you can work alongside them.

It also helps to be creative and work around your underage status. A good place to start is at your school, with opportunities to play at assemblies, fetes, school dances and whatever else you can think of. Hancock Basement’s Nick Craven offers some more advice when it comes to finding those elusive initial shows, noting that “parties and band comps are good as well, and can help you get some more exposure for your next show. It also helps to make a list of venues or speciality nights you think you could play at and contact the booking person to see if they are interested in having you play.”   On that note, don’t just limit yourselves to contacting promoters and bookers; if you see that a band you like and relate to are playing a venue near you, contact them online with a link to some of your stuff (which saves inbox space) and ask if they’re in need of an extra support band. “Hopefully you'll strike a chord with a few other bands and you can help each other out,” says Miska Mandic of Teenagersintokyo about establishing relationships with other acts. “Put yourself out there and contact other bands. Chances are they’ll like you and want to play shows together.”   When it comes to the live arena, it’s also important to consider your stage presence. We’re not saying go out and put on your best Howlin’ Pelle Almqvist impression, but once you’ve got past your pre-show nerves, relish the experience and have some fun with it. “Putting on a good live show can win people over instantly,” says The Grates’ guitarist John Patterson. “When we were starting out, we would support a lot of bands, and the crowds would have no idea who we were and they wouldn’t really care. You’ll get that a lot. But if you put on a good show and surprise the people who’re there for the headlining band, then those people will remember you and they’ll (hopefully) want to see you again.”

So you’re excited to play some gigs, right? Well next up, we’ll take you through the promotional process and tell you had to get some more shows.

"A good live show can win people over instantly. We’ll always get veteran metal fans complimenting our stage show, or indie kids telling us they’re discovering harder stuff because of what we’re doing. If you’re having that effect on crowds then you know you’re doing something really good.”