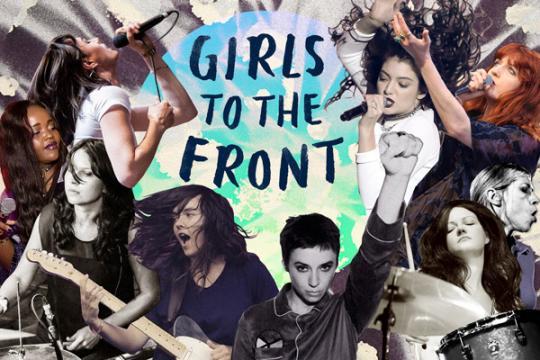 Here at Unearthed, we're bringing #GirlsToTheFront by highlighting the amazing contributions to Australian music made by women. We asked some of our fave ladies to talk about the female Australian musicians who inspire them. Here's what they had to say:

Jen Boyce from Ball Park Music, on why she loves Gordi:

“I’d heard ‘Nothing’s As It Seems’ quite a few times on triple j before I actually thought, ‘oh, I really love this song, I need to find out who it is!’. And every time I would hear it I would sit in my car and let it wash over me because I had no idea what it was. It all sounded flowing and effortless and just beautiful. Her voice is really classic sounding, spot-on and precise, and I love the harmonies and classic melody in this song.” Hear it below:

“I only met Airling recently, on the Washington tour. I was stunned by how beautiful a person she is. Her music’s fantasic, she has an amazing silky voice. Something which I think is really important is how a person conducts themselves in front of other people – my dad owns a football school and something he really emphasises is that yes, you can be really talented, but if you’re going to be a dickhead, you’re not going to command respect.

It’s like Lionel Messi vs Christiano Ronaldo scenario, where everybody vastly respects Messi because he’s a good guy and not arrogant, and I think Airling represents that to me. She’s  the kindest person I have ever met, and she’s someone that I think can be a really great role model not just in terms of music,  but in terms of how to how to behave in the public sphere as a person with influence, who represents something and has to lead people, in a sense.” Hear ‘The Runner’:

Kathryn Rollins talks up a song she just heard on Unearthed this week - ‘Puddles’ by MKO:

“I just love it so much! There’s something about it that’s really refreshing. The production’s really uniquie – it actually reminds me a lot of a Michael Jackson ballad. I love the lyrics and how they’re kind of nonsensical. The vibe is great.” Hear it: