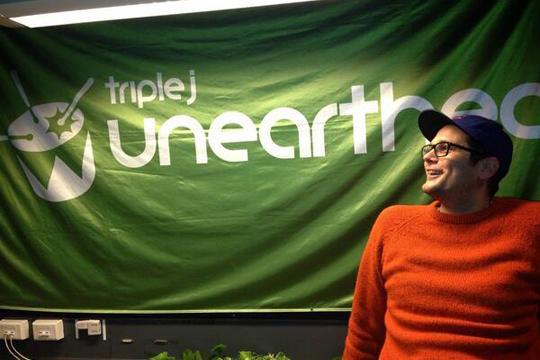 triple j Unearthed spoke with Chris Zajko (pictured) of MusicNSW about the ins and outs of underage gigging. If you're under eighteen and looking to play gigs, here's everything you need to know:

What are the rules and regulations around being underage and playing gigs?

"Essentially the laws are the same for everybody whether you're a musician or not. Unfortunately, if it's a bar serving alcohol then you're not allowed in. But of course there are a lot of venues that put on underage shows, so there are ways around it... I think non-traditional venues are the way to go for under 18s! Things like town halls, PCYCs, high school halls, there's plenty of options out there if you just scratch the surface and look around." in NSW, licensing laws state that (3) A minor does not commit an offence under subsection (1) (a) if the
minor: (b) is performing in a show or other live entertainment performance held in the bar area, and is in the company of a responsible adult while in the bar area.

What’s the best way to go about lining up gigs if you’re under 18?

"One of the best things I can recommend doing is networking with the scene in your area, getting to know like-minded bands in your area, and creating a scene if there isn't really much of one there. You know, take responsibility for that yourself? It's a really kind of word-of-mouth thing, I reckon, getting gigs, especially at a young age, because not a lot of big time promoters will approach you if you haven't really got that reputation yet or if you're unable to play in over-18 licensed venues. I think it's a really great thing to take control of that yourself. Another great thing I always recommend is approaching local councils. It doesn't sound like the coolest thing in the world, but it really does work you know. There's always a budget set aside within local councils to put on events for youth. Often they're alcohol-free all ages events. They've got PA system, a gig's a gig! And if you can play in front of your community and get some friends along and create a bit of a buzz about yourself, then it's a start."

Should you say ‘yes’ to any opportunity?

"There are a few different schools of thought on this. I personally think that whilst you're getting started it's great to get your name out there. In music, as a performer, I think it's important to strike a balance between creating a buzz about yourself and getting a profile and getting your name out there, and then also keeping in mind your goals for the future. Early on it might be a case of taking whatever opportunities you can get, you have to build up your performance experience and practice and make sure your guitarist doesn't suck when it comes time to play in front of a bigger crowd. Then it gets to a point where you might want to think a little more strategically. Get to the point where nothing is done by accident, every little step is a small piece of the puzzle."

Should you get paid and how much?

"It varies so much. So many bands will play free shows for a long time, just to get their name out there. That's a valid thing to do for a while, but not something that I personally think is sustainable. I think you should value your music, and value your performance and sometimes that's with a dollar value. It's really important to give the impression that you're worth something and not let people take advantage of you. It's a difficult balance to find - depending on how big an opportunity it is versus how much you might get paid for that. As far as actual numbers go, it's a very difficult thing to answer. It might be a great opportunity, supporting a much bigger band, so you're willing to do it for a little bit less than you normally would... and you don't always get paid in money a lot of the time. They might supply equipment for you which saves you money on petrol, or supply accommodation, or travel, or car hire - that sort of thing!"

You guys talk to kids about Performance Etiquette, what does that mean?

"I think it's really important when you're starting out to understand the way the live scene works. Understand the relationships, and understand how the industry is really built on very personal relationships and friendships especially. Essentially it just means don't piss people off! If you're playing with a bigger name band than you and you have an opportunity support them make sure you go on at the right time and go off at the right time, introduce yourself to the sound guy and shake their hand, make as many friends on site as you can. It's really common sense but most people don't think about it."

If you manage to get a gig, how do you promote it?

"Obviously social media is a great start - start a Facebook event and invite all your friends! All of those basic things are definitely worthwhile. Get creative with Twitter and Instagram and all of those things as well. Direct emails to fans is something that a lot of people overlook a little bit. Start a newsletter, an e-news. I reckon it's never too early to start doing that. Why not have a sign up sheet at every gig you play? Even if it's only 10 names at first, over the course of a year you'll end up with a few hundred and that's a way to access you fans directly."

Why is it important to play live gigs?

"I think it's a really important income stream for musicians. The live arena is a really great place to make money for one thing, it's a great place to build a reputation, and it's a really great way to connect personally with people involved in your scene. It's what the fans really hang out for! For a big fan of your band to go along and see you live, it's a really special experience for them and it's important not to discount the magic that happens! A recording is fantastic and it's necessary, but playing live in front of people that care about your music is a special experience and it's fun. It's also a great place to network as well, and meet people in person: other bands, promoters, venue staff, booking agents, all those sorts of relationships that will benefit you down the track."

To hear more info on everything above, as well as Chris' thoughts on expenses, what equipment you need to perform live, examples of all ages events to get involved with, and heaps more just head on over to our Soundcloud or listen to the full interview.