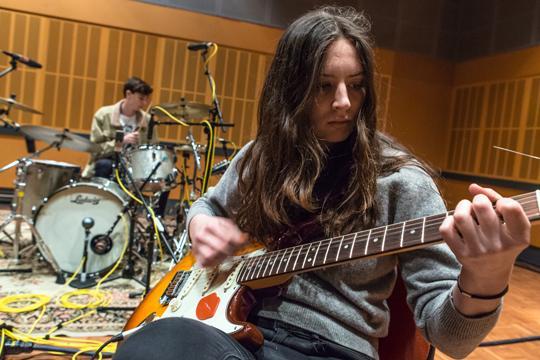 Here it is! ‘Commotion’ is the new single from Mosquito Coast, your winners of Unearthed High in 2015.

The Perth duo laid the song down over the weekend with producer Greg Wales at triple j’s studios in Sydney as part of their prize for winning the competition this year. It premiered on triple j Breakfast this morning with Matt and Alex.

“We finished writing it four days ago in Perth,” Naomi from the band told us over the weekend. “And we wrote the lyrics 30 minutes before we got to the studio in a burst of inspiration. We wanted to wait until the exact right time.”

“We wrote ‘Call My Name’ in January, and we’ve been jamming out new material since then," says drummer  Connor. "With ‘Commotion’, we knew the pressure was on, and we wanted to make something really great.”

Spoiler alert: they totally did.

You can stream, rate, review and download ‘Commotion’ for free over at Mosquito Coast’s Unearthed profile.