How NOT to get your songs played on triple j Unearthed 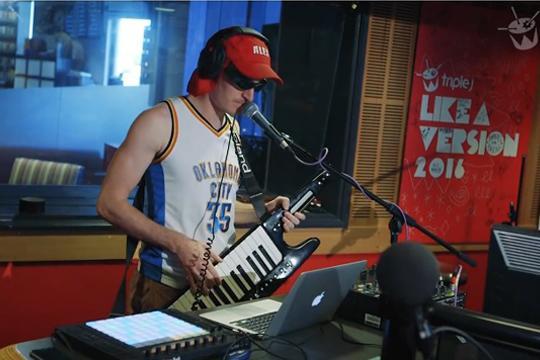 Quick recap: for the second time in as many attempts, rogue triple j breakfast host Alex Dyson has been disqualified from a triple j Unearthed Remix comp.

The rat dog was DQ’d this morning on triple j for showing what can only be described as a blatant and reckless disregard for the competition T&C’s. This time, Dyso breached serious copyright protocol by including an excerpt from the poem On The Ning Nang Nong by Spike Milligan in his #PlaySchoolRemix. Watch below:

That poem is Mr. Milligan’s intellectual property, and even though he passed away in 2002, the poem will be copyrighted to his estate for another 58 years before it becomes out of copyright under Australian law. Put simply, to have your material published on Unearthed, you need to have the copyright over all words and music and any sound recording in the tracks. Crumb move, bro. Read the rules.

It’s not the first time Dyso has been disqualified from an Unearthed comp. During our Hermitude Remix Comp last year, his track was banished from Unearthed for including too many samples. Yes, it’s a remix comp, but we cleared the use of the Play School theme for you to remix, and it was the same story with Hermi’s ‘Ukiyo’. Taking someone else’s audio without their permission is not allowed.  Disqualified!

It’s not just the recording that matters.  Melody and lyrics are both under copyright too and songwriters are compensated when they are played on the radio.  Singing/humming/or even speaking someone else’s song without their permission is not allowed. Disqualified!

It seems obvious, but you can't upload songs that contain excessively offensive language. We take this stuff really seriously, and we won’t approve tracks that violate laws regarding harassment, discrimination, privacy or contempt, infringe on copyright, are abusive/offensive (especially including obscenity, blasphemy and racial and cultural vilification), are of nuisance value or inappropriate and vexatious, that compromise your own privacy or the privacy of others, or lyrics that endorse or promote commercial products. That’s just a start. To be part of Unearthed, we'd encourage you to either remove any lyrics from your songs which could fall under any of the above categories.

BE AN OVERSEAS ARTIST

This one’s easy as. triple j Unearthed is an initiative for discovering and sharing the best independent Australian music – if you are an artist from overseas, we cannot host your music on triplejunearthed.com or play it on Unearthed digital radio.

UPLOAD JUST A BIT OF YOUR SONG

It happens more often than you’d think. As stated in our Unearthed artist agreement, to have your material published on Unearthed and to be part of any competitions we are running, you must submit a complete track.

In closing, Round 2 in the triple j breakfast remix battle-off between Matt O’Kine and Alex Dyson goes to Matt. By default. Again. At such a time as Dyso has learned not to let himself down, let the listeners down, and let us at triple j unearthed down by showing little to no appreciation for the rules we work so very hard to uphold, we will welcome his next upload with open ears. Hot tip tho – we have seen Ratatouille, Stuart Little AND Mouse Trap and we will know if you try to sneak any more samples in. You grub.