If You Hate Kanye West... 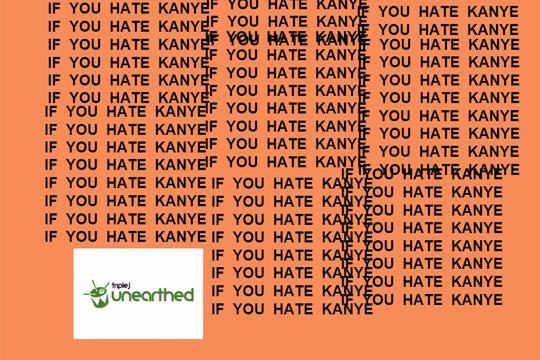 There’s few artists in the world right now that are as divisive as Kanye West.

Every play he gets on triple j is met with reams of activity on the textline.

“Why do you subject us the this drivel? Claire, Daylesford”
“Yeezy just got me up and popping on a Monday. This is muy caliento hot hot hot.”
“Its like listening to turds hit water. Terry Canberra”
“He's lost it but so have I, love Kanye! In yeezus we trust! Pete Central Coast
“Did he just say he was going to make a jacket out of pasta?”

In the past, you might have heard us recommend some acts off Unearthed we reckon you’d love in our ‘If You Like’ series: Chet Faker, Tame Impala, The Smith St Band and Missy Higgins.

But this time around we decided to flip the script and take a nice big swig of that haterade.

If you hate Kanye West – his rapping, his bravado, his rants, his fashion, the autotune, his anything - you’re about to hear from 5 emerging Australian hip hop artists who you might hate just as much

If you love Kanye? Don’t worry, this one’s for you too. Unearthed guy Lachie Macara's on that what we do, don't tell your mom shit - and you can get the full tracklist below: