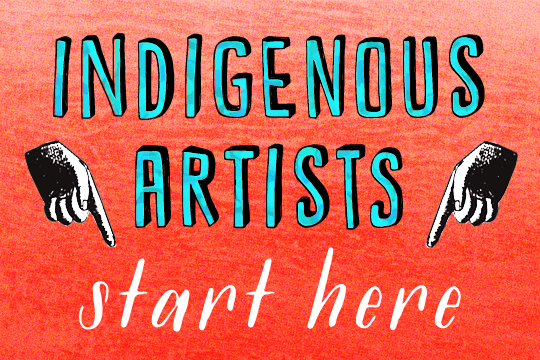 Aboriginal and Torres Strait Islander users are advised that some of these websites may contain images and voices of people who have died.

ABC Online – Indigenous
The ABC Online Indigenous Gateway is designed to reflect current issues in the Indigenous community. It is a highly informative, dynamic and interactive entertainment space, showcasing creativity in a rich media environment. It draws together content from around the ABC.

Radio National – Awaye!
AWAYE! brings you diverse and vibrant Aboriginal arts and culture from across Australia and the best from indigenous radio broadcasters around the world.

ACCELERATE
ACCELERATE is a tailored leadership initiative for talented Aboriginal and Torres Strait Islander people working in the creative industries.

Ministry For The Arts – Indigenous
The Ministry for the Arts administers a range of Australian Government funding that supports Indigenous culture, languages and visual arts.

AIME Mentoring
AIME provides mentoring and educational services for Indigenous high school students to see them get through at the same rate as every Australian child.

Skinnyfish Music
Skinnyfish Music is based in Darwin and has been in operation for over 10 years. The driving philosophy behind the label is to work with and provide opportunities for Indigenous artists.

Desert Pea Media
Desert Pea Media is a not-for-profit, incorporated association established in 2002. For more than a decade they have been learning, building relationships and perfecting a process of working with young people and communities in regional and remote areas in Australia. DPM focuses on the process of storytelling to empower young people and to create important social and cultural dialogue.

Heaps Decent
Heaps Decent is an initiative committed to finding and nurturing the creativity of underprivileged and Indigenous young people and emerging artists. By providing resources and opportunities, Heaps Decent supports the development of high quality Australian music with a unique identity.

NG Media – Music
NG Media is an Indigenous media organisation based in the remote desert of WA. NG Media’s vision is to empower Yarnangu to create and share their own stories through multi media.

Music: Play for Life – Sources Of Financial Aid
Music: Play for Life provides information, advice and inspiration to Australians to encourage them to begin – and stick with – their music-making journey. They provide a list of sources of financial aid for musicians, including those specifically for Indigenous Australians.

ICTV: Indigenous Community Television
ICTV is an independent not-for-profit organisation. Our core purpose is to improve the livelihoods of Indigenous Australians through the creation of media distribution outlets that enable the active sharing of stories, culture, language and the provision of essential information.

IndigiTUBE
IndigiTUBE is an online community for sharing and accessing media made by and for Indigenous people in remote Australia.

Gurrumul Yunupingu Foundation
The Gurrumul Yunupingu Foundation was established in 2013 with a clear purpose to engage and support young Indigenous Australians – particularly in remote communities – through long term programs and activities that build on their natural strengths, assisting them to find pride and place as leaders in their communities, and giving them hope for the future.

Bush Bands Bash
The Bush Bands Bash (BBB) has developed over the last ten years to become the peak Central Australian Indigenous music showcase event. Presented by MusicNT, the concert features six bands from the Northern Territory, Western Australia and South Australia, playing to a mixed Indigenous and non Indigenous audience of thousands. The BBB is preceded by a three day professional development and rehearsal intensive called the Bush Bands Business for all the bands participating in the Bash.

The Seed
The Seed Fund is an Australian organisation, philanthropic in nature, we are not for profit and are privately owned. Established by musician John Butler through a donation to the Australian business arts Foundation's Australia Cultural Fund in 2005, we offer grants annually to bona-fide practicing artists and arts practitioners who are Australian citizens.

Clancestry – Pathways
Clancestry Pathways is a mentoring program that has been created to offer twelve early career Aboriginal and Torres Strait Islander song writing artists and media interns a hands on opportunity to spend a week in Brisbane with senior music and broadcasting industry professionals participating in workshops, discussions, media calls and recording sessions.

National Centre for Indigenous Excellence
The NCIE builds capabilities and creates opportunities for Indigenous Australians by delivering life-changing programs and promoting progressive thought leadership through its enterprises and facilities.

Australia Council – ‘Protocols for producing Indigenous Australian Music’
Australia’s unique Indigenous artistic and cultural expression is rooted in thousands of years of heritage and continuing practice. This guide is designed to be an initial point of reference in planning a work with Indigenous music practitioners or using Indigenous cultural material.