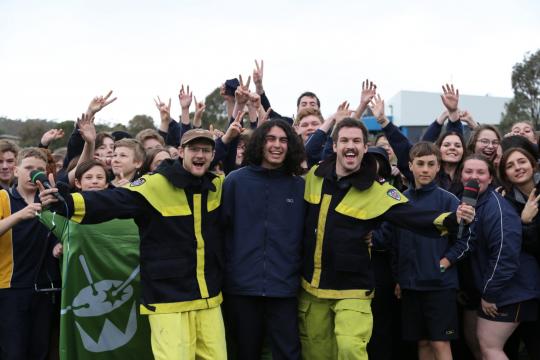 This Castlemaine teen just had the best day of high school ever!

Kian, a 16-year-old singer from Castlemaine Secondary College, has been crowned the winner of this year’s Unearthed High competition, stunning us with his song ‘Waiting’, an insightful slice of neo-soul expressing uncharted feelings and uploaded just last month.

The Year 10 student was surprised with the big news by Ben and Liam, who gatecrashed Kian’s school assembly in the middle of a fire drill. Disguised as local firefighters responding to an alarm, they snuck their way onto the school oval to announce Kian’s fire track ‘Waiting’ had made him the newest UE High champ.

Inspired by soulsters like Miguel and Frank Ocean, Kian is the first act in 11 years of Unearthing the best high school music acts who has actually appeared in the Hottest 100 before taking out the comp.

He splashed into the countdown as the singer behind the hook on ‘Cloud 9’ by Baker Boy, who he met through Indigenous Hip Hop Projects – an initiative Kian's father helps run. He's been travelling with his dad to remote Indigenous communities since the age of two, and at age 13, made an instant connection with Baker Boy when they first met at Beswick Community in the NT.

triple j Unearthed Music Director Dave Ruby Howe praised Kian as "one of the most promising voices in the country - high school aged and otherwise. It feels like just the beginning of this young artist's story."

Following ‘Cloud 9’, Kian’s toured as part of Baker Boy’s posse through capital cities and at festivals like Groovin The Moo and Splendour In The Grass. Now, he’s ready to step up and out from being “the guy who sings ‘Cloud 9’” and into his own as a solo artist He’s playing his first solo show later this month, performing with a four-piece band at Castlemaine’s Theatre Royale – the perfect prep for his BIGSOUND debut in Brisbane.

Word is he’s already at work on a full-length album, aiming to releasee in the first half of 2019. As part of his prize, Kian will be flown from Victoria to triple j HQ to professionally record, mix or master his music, following in the prestigious footsteps of UE High alumni Arno Faraji, Gretta Ray, Mosquito Coast, Japanese Wallpaper, Asta, and Stonefield.

This year ranks as one of our biggest Unearthed High competitions ever, with over 1,000 songs uploaded and buzz around triple j being that the quality of this year’s entrants has been one of the highest ever, including our super-talented finalists: Burnout, The Kid Laroi, yergurl, and Nancie Schipper.al

RELATED: 'Past Classes: Where are these Unearthed High finalists now?'