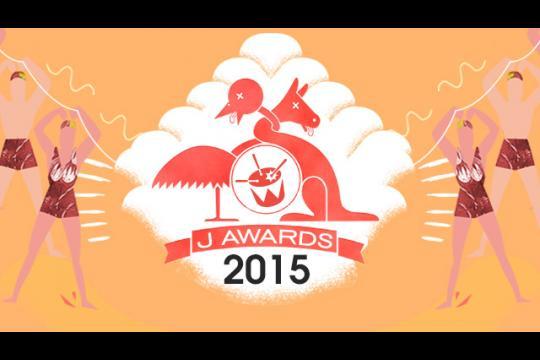 Now in its 11th year, the J Awards are our annual recognition of the best Australian Music. Since 2007, we've honoured the best Unearthed acts in the country by nominating them for the Unearthed J Award to recognise both their extraordinary talent and artistic potential. This year's no different: we've selected five of the very best upcoming Australian acts to be in the running. Here's your chance to meet 'em!

"We only met in the last week of December last year," Boo Seeka told us recently. Safe to say, it's been a big twelve months. The Sydney duo have been one of the most organic success stories of any act on triple j Unearthed in 2015, turning two stellar singles - 'Kingdom Leader' and 'Deception Bay' - into the fodder for two national tours and two more over in Europe, as well as being Unearthed feature artists in July and earning a spot on triple j's Like A Version 11 compilation. Their music's decidedly organic too, sitting in a wholesome pocket of pop, soul and electronic influences, and turning out earworm melodies that feel both warm and nourishing. After they take on the Australian festival circuit this New Years, you can look forward to the band's debut album in the early stages of 2016.

Feki emerged from a distant electronic wormhole in 2015 with enough jet fuel to melt the steel beams in all of our minds. He deals in moonrocks, bleeps, and bloops, and couples his signature outer-worldly sound with a warped take on song structures that feels like a magic trick. Take a few minutes to listen to 'Remember' - uploaded to Unearthed by Brisbane beatsmith in March this year. For a brief moment, all the secrets of the cosmos are laid bare: Bruce Willis was dead the whole time, a jaffle is just a toasted sandwich with the edges smooshed together, and there's a shortcut right at the start of Rainbow Road in Mario Kart 64. Feki's taken one giant leap and turned space and time inside out: it's why we picked him to play the Listen Out festival this September, and it's why he's nominated for the Unearthed J Award in 2015.

There's a pretty magical quality to Gordi's songs. We met the Sydney songwriter around this time last year with sparkling first song 'Nothing's As It Seems', and she more than carried all her 2014 momentum into the New Year. 2015 has seen Sophie Payten blossom into one of the most compelling songwriters on triple j Unearthed, coupling an obvious ear for melody with twinkly, acoustic-meets-electronic arrangements and vocal harmonies that swell and surge stronger than a riptide. On stage, she effortlessly glides between charming vulnerability and hilarious deadpan, and she was a huge highlight on the Unearthed stage at Bigsound this year. Expect bigger sounds from Gordi moving forward - we're super proud to nominate her for the Unearthed J Award in 2015.

Tired Lion ooze bratty sludge. The Perth four-piece's achievements in 2015 read like a bucket list for young bands: this year alone, they've toured the country twice, released an excellent second EP in I Don't Think You Like Me, crushed a Violent Soho cover for Like A Version, opened up Splendour in the Grass thanks to triple j Unearthed in July, and backed that up by headlining our showcase stage at Bigsound in Brisbane in September. Recalling the reckless abandon of Soho, the band capture the brutal frustration of young adulthood in a humbucked whitewash of guitars and drums and through singer Sophie Hope's poisonous lyrics. "I don't think you like me," she hisses, caustically, over and over on the EP's title track. It's irony at its most delicious - we love Tired Lion here at triple j Unearthed.

Vallis Alps came out of absolute obscurity to become one of the most talked-about acts on triple j Unearthed this year. It's a story made in electro-pop heaven: Parissa meets David while studying overseas, she moves back to Canberra, but they still collaborate on music long-distance. Debut single 'Young' gets released onto Unearthed in January and blows up the Internet. People fall in love with Parissa's lilting, meditative voice and David's ornate production. They're our Feature Artists in January, David moves from Seattle to Sydney, and we follow them as they prepare for their first ever festival show at Splendour In The Grass. It's been up and up ever since - they've sold out multiple headline shows across the country, and show no signs of slowing down. It started with a bang, and we're excited for more fireworks.

Big props to all our nominees! The winners of the four award categories will be announced at the J Awards ceremony and live on air Thursday November 19.