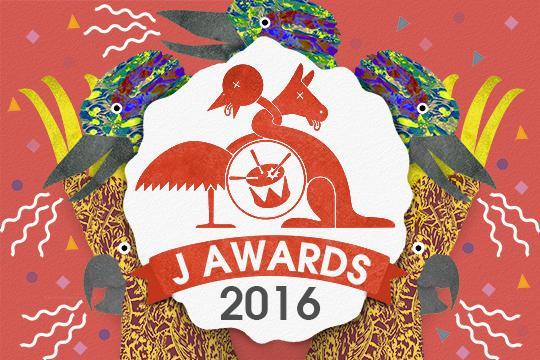 2016 has been an incredible year for independent Australian music. We're stoked to nominate the following five artists for the 2016 Unearthed J Award. They've all had hugely impressive years, and we couldn't be more excited for and proud of them all. Without further adieu...

Sometime toward the end of 2015, Alex Lahey sold her 1999 Toyota Corolla in order to pay for the recording sessions for her debut EP, B-Grade University. Question, if you will, the logic that belies selling your main mode of transport to fund a career that's inherently reliant upon transporting lots of heavy items to live music venues, but you can't argue with the results: from opening up Splendour In The Grass for Unearthed, to headlining our BIGSOUND showcase, to selling out shows on a national headline tour of her own, Alex has more or less dominated Australian Music on every level this year.

Gretta Ray is responsible for two of the best songs to be uploaded to Unearthed this year. In 'Drive', we were introduced to a songwriter with a natural ability to craft songs that amount to more than the sum of their parts, and more than that, to cultivate feeling in her music. On the back of that song, we named her our 2016 Unearthed High winner, and invited her to triple j to record some music with us. 'Unwind' followed; a vivid, sprawling, number full of all kinds of snakes and ladders, delivering on her immense potential and hinting still at what’s to come. Now that school's out, we're pretty excited to watch Gretta gradually take over the world.

Julia Jacklin's songs were made for waltzing. Her music is traditional in the best way, full of vivid characterisations, smart structures, and soft electric guitars. We first met her as a solo artist a couple of years back, but 2016 saw the Sydney-based songwriter step into the sunlight, basking in the reflective warmth of her debut album Don't Let The Kids Win. We've been able to feature a bunch of Julia's songs on Unearthed Radio this year, before triple j featured Don't Let The Kids Win in October. Her gentle coo is sure to soundtrack many an Australian afternoon this summer, painting silky, watercolour brushstrokes in between your ears.

We've been trumpeting about Kuren to anyone who'll listen for almost the entire year. Named as one of our Artists to Watch in January, it's been a pleasure to sit back and watch him flaunt his burgeoning artistry in 2016. Curtis makes rich, textured electronic songs that sit somewhere between grey and dark grey on the colour palette, adorned with all the bells and whistles. Except, more accurately, they're not so much bells and whistles as they are pops and squeaks and crunches, a complex tapestry that's changing the fabric of Australian electronic music in 2016. Kuren's walked the walk this year, winning our 2016 National Indigenous Music Awards competition, gaining a tonne of new fans, and paving a bright future with his arsenal of dark sounds.

In a sea of dank prunes and dried apricots, one Sultana stood up to be counted in 2016. Her name's Tash, and she's from Melbourne. DIY doesn't even begin to come close to describing her aesthetic: Tash's songs are built around loops and samples she creates herself, emulating a full-band experience to shape a totally original sound, as vast and expansive as the internet, and so dense you could sink in it. In a little under a year, Tash has gone from busking on Bourke St in Melbourne to filling our Unearthed Bigsound showcase to capacity (with a line around the corner) in Brisbane this September. It's been an incredibly quick rise, but also an incredibly organic one, and we’re very proud to have been a part of it.

Get in on the full list of J Award nominees over here, and don't forget to hear the playlist of our nominees!

The winners of the four award categories will be announced at the J Awards ceremony and live on air Thursday November 17. Got a fave? Let us know on twitter.