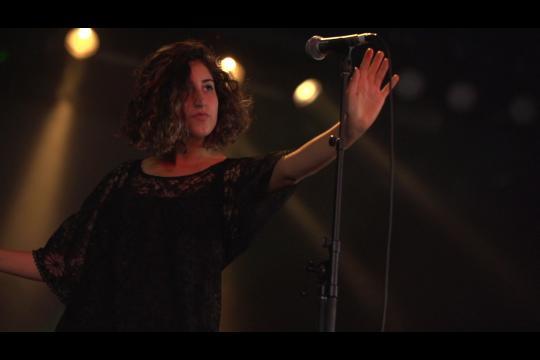 Without question, one of the biggest discoveries on triplejunearthed.com this year has been Vallis Alps. The duo, then based in Canberra and Seattle, uploaded their tracks ‘Young’ and ‘Thru’ to Unearthed in January.

We were blown away by both the maturity of their songwriting and the rich textures of their production, and it took less than a week for us to lock them down as an Unearthed Feature Artist.

All they’ve done since then is become one of the most streamed and downloaded artists on Unearthed this year, as well as tallying up more than 10 million plays of their debut EP online.

Then came the tricky part: they were booked forSplendour in the Grass and had to work out how to take their transcontinental partnership out of their bedrooms on opposite sides of the world, and onto the big stage.

5 weeks ago, David flew in from Seattle and Parissa drove up from Canberra to start their life as a ‘proper band’ in Sydney. Those early rehearsals, captured below by triple j Unearthed, were the first time the pair had been in the same room together since November 2013.

You’re about to witness, quite literally, the birth of Vallis Alps as a live band. We tailed them from those first rehearsals right through to their first ever festival set at Splendour, and took in everything in-between.

Catch the duo on tour here: