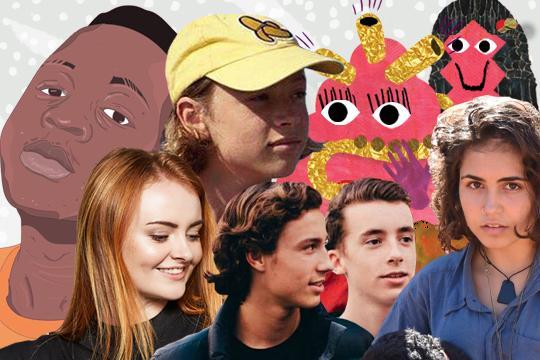 This year’s crop of entrants was real creamy – with more than 1,000 songs coming in from High School acts right across the country over the four weeks of the competition. We’ve listened to ‘em all, and we’re excited for you to meet our five finalists for 2017. Here we go!

There's a decidedly wavy breeze blowing out of the West and cruising atop a cumulonimbus is Arno Faraji, one of the most exciting young hip hop artists in the country. His keen, future-leaning productions are only matched by whipsmart raps and a delivery oozing charisma.

Backing up her appearance as a finalist in Unearthed High 2016, Nina returns to the top of the class with ‘Pure Luck {Ft. Freya Staer}’, another high quality production that’s been ricocheting around our ears, not to mention her name already on the 2017 Listen Out lineup. And all that on the cusp of turning 18!

You can hear it immediately with Stevie Jean. That voice. It's unstoppable. The 17 year old marries her immense voice to songwriting that is ignited with raw emotional power. It'll have you in a sweat by the time its four minutes are up, demanding you to experience it again.

This teenage duo out Melbourne have had to keep their heads in the books during their final year of school while their burgeoning music career blew up around them. Their super clean, chilled-house track 'Orbit {Ft. Ashe}' has struck a chord globally, amassing more than 8 million plays on streaming services and lighting a path to big things ahead.

Already receiving nods from industry heavyweights like Horrorshow and Amy Shark, this 16 year old solo artist has flexed his songwriting chops across three uploads to Unearthed in 2017. Taj's stuff is rich in sound and ideas but you can still hear his roots as a busker at his local mall shine through.

“By now it's an annually repeated motto that this is the best but also hardest time of year at Unearthed. It's exhilerating to discover the creations coming out of bedrooms and garages around Australia from ambitious young musicians and this year's pool has been as thick with talent as ever. Picking just five finalists from the crop is super difficult but we couldn't more excited to introduce you to the most outstanding acts from Unearthed High this year who'll be leading the next generation of Australian music.”

Huge congrats to our finalists! You’ll meet the winner on triple j with Ben and Liam real soon.