Meet your 2017 Unearthed J Award nominees for Artist Of The Year! 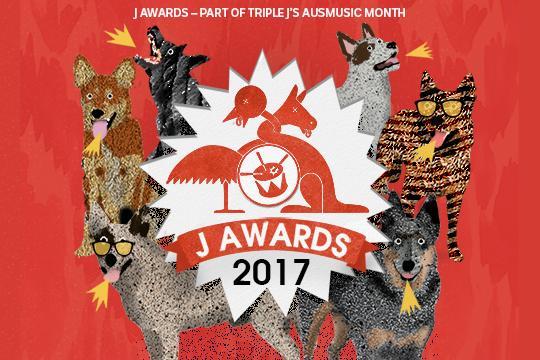 There has been so much amazing Australian music uploaded to triplejunearthed.com in the past 12 months, and choosing our five finalists for this year's Unearthed J Award for Artist Of The Year has been, to put it simply, very difficult.

Still - it's Ausmusic Month, and we know what needs to be done: we're excited to introduce you to the five new, independent Australian artists we reckon have made the most significant contributions to new Australian music this year. We won't let the anticipation bubble over any longer. It's time.

Meet the 2017 Unearthed J Award for Artist Of The Year nominees!

Fulfilling the stratospheric promise of her spacey songwriting moniker, Sydney's Alex The Astronaut has reached dizzying new heights in 2017, with this J Award nomination coming as the deserved cherry on top. Having toured nationally with Montaigne and crushing a Paul Kelly favourite for Like A Version, Alex has had us captivated with songs that're speckled with warmth, inventiveness and her instantly relatable personality - none more so than Alex's heartfelt ode to acceptance and love, 'Not Worth Hiding'.

You couldn't dream up a better start to your career than the 2017 that Baker Boy has had. Winning the Unearthed National Indigenous Music Awards (NIMAs) competition on the back of his high energy debut Cloud 9 {Ft. Kian Brownfield}' announced his arrival, while follow-up single 'Marryuna {Ft. Yirrmal} has cemented Baker Boy's spot as an act to watch. During a banner year for Indigenous storytellers and rap the confident fusion of English and Yolngu Matha languages in his rhymes makes Baker Boy one of the most vital artists of the moment.

If you haven't been dancing yourself silly to the sound of Confidence Man in 2017 then, let's face it, you just haven't been living! On the back of their grin-inducing hits 'Bubblegum' and 'Better Sit Down Boy' the party-starting four piece have had an enormous last 12 months, bringing their euphoric shape-pulling live show to festivals like Laneway, Splendour and Glastonbury - building a global buzz for what's ahead in 2018.

As the now infamous story goes, Ruby Fields uploaded her debut song 'I Want' to triplejunearthed.com, crashed for a morning nap and by the time she woke up it was everywhere. It's aptly simple for someone who revels in a self-assigned status as an 'average chick', writing garage jams about P plates and sinking beers. Beneath Ruby's disarming humour and knack for punchy choruses is an insightful streak reminiscent of Courtney Barnett and Alex Lahey as Ruby explores the pressures and frustrations of being a young woman. Cheers to that!

Perth based perfect human Stella Donnelly has seen things go from zero to a hundred in 2017. As well as booking in live slots with heavy hitters like San Cisco and Polish Club, Stella put in a star-making turn on the Unearthed stage at Bigsound this year, wowing the crowd of industry bigwigs and punters with her ability to dissect raw subject matter with wit and breathtaking incisiveness. Stella will pull you in close with her incredible voice before breaking your heart with piercing songwriting. We're calling even bigger things for Stella in 2018.