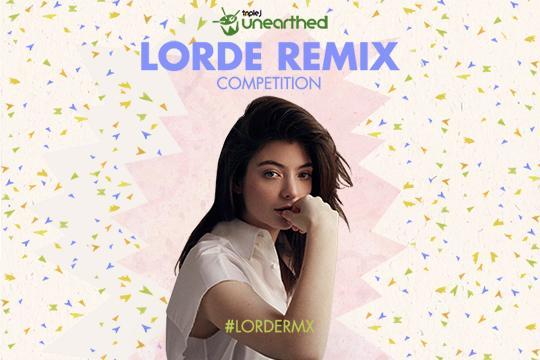 About a month ago, we teamed up with Lorde to give you the chance to remix her track ‘Homemade Dynamite’.

Literally more than 1,000 flips, pitch-shifts and “awesome, right?”-s later, we’re ready to reveal to you the five artists who stood out as the best and most creative to our ears. The winner will be chosen by Lorde herself and revealed on triple j brekakfast with Ben and Liam on Monday, October 23.

These are the five finalists!

NSW producer Aela Kae was one of the finalists in our Hermitude remix competition in 2015, and she’s applied some real magic dust to Lorde’s track too. This one succeeds in its subtlety: it’s a sneaky-beautiful harmonic rearrangement.

Taking the melody from the line “Now you know it's really gonna blow *mouth noise*”, Melbourne’s Eilish Gilligan crafts Lorde’s banger into a sprawling, delicate, piano-based chamber song. It’s minimalist, organic and will flow over you like a creek running through a zen garden.

Best chuck your headphones on for this one, Unearthed’s favourite dank EDM-loving kumera has sliced up Lorde’s vocal and tossed it everywhere like some delicious warm salad, with a ‘Spark-a-ling’ beat and much panning.

This Perth rap crew turned Homemade Dynamite into their own furious hip-hop beast. It’s full of flavour, cruises the exact speed limit down the main street of Flow City.

Yung Gun Vincent Sole’s #Lordermx morphs from a twisted twilight anthem into something truly special: a potent, pollenated, blossoming duet. It honours the original and injects something new + so smooth.

Cool, they're your finalists! Check back on Monday to find out who the winner is!