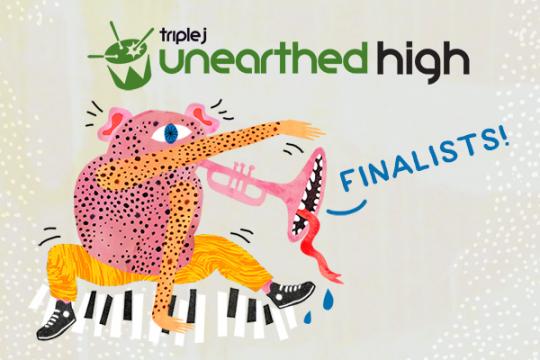 From more than 1100 song uploads, we’re down to just five artists. These are your 2018 Unearthed High finalists!

Unearthed High 2018 has already been hot sauce –  and so far we’ve met some of the best teen producers in the country, a bunch of legends from regional Australia making huge tunes, and made the early assessment that this year hip-hop was influencing more artists than ever before.

Now it’s time for your finalists – the five best High School artists in the country as of right now. Ready? We’re going in.

Adelaide teens Billy, Nik and Kyle aka Burnout distill the essence of Unearthed High into their two minute rocket of a track 'Get Out'. You can hear it in the energy and chaotic skate punk surge, this a group of friends having the best time ever making music together. And it turns out they're really good at it too.

Having stepped into the spotlight at 14 with a triumphant vocal feature on Baker Boy's 'Cloud 9', 16 year old KIAN is now writing his own story as a solo artist with sky high potential. Packing an emotional punch, his track 'Waiting' is bound for your crush's next playlist.

South Sydney hip hop sensation The Kid Laroi only uploaded his track 'Disconnect' to Unearthed during the competition's final hours, but tell you what - it's one heck of a buzzer beater. With all this confidence and cool you'd think that The Kid Laroi has been rapping for 14 years, not that he's only 14 years old.

Unearthed's had an eye on this talented singer-songwriter since she appeared in the 2017 competition with her striking songwriting. Now in her final year of school, Nancie's making music that's assured and super warm. It feels like just the start of huge things for her.

Listening to the uploads from yergurl it's almost as if you're getting a look at a constantly refreshing feed full of her influences. There's colours flashing in slow motion, contemporary pop icons like Charli XCX and Lana Del Ray, dank memes and regional teenage hangups all stirred up together in the confines of her befroom studio.

More from Unearthed High? Heaps of highlights here on the 2018 Report Card.