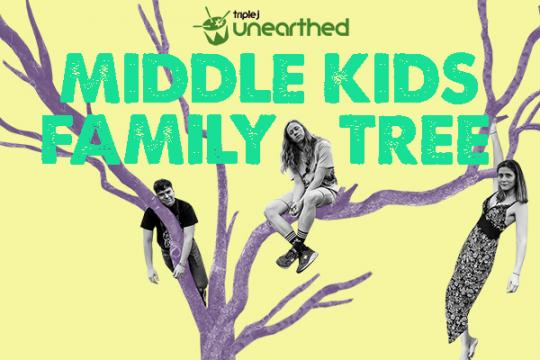 There's no such thing as an overnight success.

If any band should be an example of that, it's Sydney indie trio Middle Kids, one of triple j Unearthed's biggest recent success stories. But to most, Hannah Joy, Tim Fitz and Harry Day came out of nowhere. In just two years, they've taken to stages around the world, garnered international acclaim, and played on US TV multiple times - all before releasing their soaring debut album.

"We had a lot of interviews being like, 'where have you come from?'," Hannah Joy tells triple j Unearthed. "But for all of us, we have been working for quite a while in our own different ways."

Middle Kids is just the tip of a very large iceberg. You could say their 2016 debut single 'Edge of Town' was the match thrown into a room that'd been filling with the creative gasses of previous projects, slowly, subtly building in strength until the perfect spark ignited them.

We're examining these overlooked musical ventures that came before, and how they all contributed to what would become Middle Kids.

While Hannah's musical life started at the age of three, when she prodigiously worked out how to play Pachelbel's Canon in D on piano by ear, her first music project was born in 2010.

"I found some other girls who were awesome and making music and we decided to start a 'girl band'," Hannah says.

"That was the start of me performing. I used to get really, really nervous, do a couple of voms before I play, I would never look up at the audience and I had this big fricking 88-key piano on stage and I'd just hide behind it.

"But slowly as we did it more it drew me out a little bit and it was empowering for me because I never felt like I could perform."

March Of The Real Fly

Lessons learned: Tim got a taste for DIY producing, and learned to play bass with a pick

Meanwhile, Tim was playing bass and producing for a wild, weird, wonderful, and sadly short-lived indie outfit, March Of The Real Fly.

"I remember seeing them at this place called Dirty Sherlow's in Marrickville, it was like an illegal venue in in a warehouse, and [drummer/frontman] Cam [Crew] had sparklers attached to his drumsticks and he had facepaint on ... I just thought they were the coolest band, so it was awesome when they asked me to play bass for them," Tim says.

MOTRF was the beginning of Tim producing for other artists, he would record drums to tape in bedrooms, relishing in lo-fi sounds. He would go on to produce for Cam's next band Morning TV, 'Poverty Line' rockers Good Boy and a scrappy Sydney DIY outfit Birds With Thumbs, but March is where his DIY obsession began.

"There's parts of that in Middle Kids. It was recorded in a very DIY way but then it's mixed in quite a polished way."

Lessons learned: Tim and Hannah became fans of each other, musically and otherwise

A very early Tim Fitz devotee was Hannah herself, who became obsessed with his track 'Hospital' ("it was nuts like I just listened to it over and over and over again. It's so magical") after he hit her up to sing on some of his tracks. Skip unearthed embed

FireFox NVDA users - To access the following content, press 'M' to enter the iFrame.Tim in turn, chose to approach Hannah because he'd been a beaufields fan.

Hannah went on to do backing vocals for some of Tim's tracks, and something like Middle Kids was almost born in that moment. Almost, but not quite.

"I was like so into Tim and his music I was trying to be able to see him again after that, so I was like 'maybe we should start a band' and then Tim was like 'I'm too busy'!" Hannah says.

"I was totally freaked out!" Tim responds. "I was like this girl is awesome and she's asked me to be in a band that sounds so intense!"

They wouldn't become Middle Kids for another two years, but Tim did start producing for Hannah's solo project. He came around in the end, and started making music with her wholeheartedly.

Lessons learned: identifying their different strengths, building trust and the working format that would become the blueprint for Middle Kids

"I felt like she actually like trusted me a lot and I was just adding like anything I felt like and then she would be like 'oh, that's cool or that's not cool' and ... we've kind of done that ever since," Tim says.

"It was kind of this cool tension push and pull thing of like creating something that was like something that we both really needed to learn how to do was to work with another person with that kind of trust," Hannah says.

After years of building that trust, that creative (and romantic) relationship, Hannah came to Tim with a little song that would change everything...

Hannah, Tim, and Harry uploaded 'Edge of Town' to triplejunearthed.com in May 2016. We know the rest of the story.

"I just remember feeling like I was a huge fan of the song," Tim says. "We really were trying to make it in the same way Hannah had, like more synth-based, and it just wasn't working and I knew Hannah loved some guitar bands like Radiohead so I was like 'maybe you should just try it on guitar' and it was actually awesome."

"I could see that she was really excited by the sound..." Tim says.

"It was exhilarating," Tim says.

And it seems the world agreed. But when that whole 'overnight success happened, the band weren't affronted by the notion.

"In some ways, we felt fresh because of the newness of the project," Hannah says.

"We all just love music so much, I don't think we've had an attitude of going 'work work work and hopefully we'll get a big break. You hope your music will resonate with people but we've never had anything else we wanted to do so it's our absolute delight to make the music."

"We have been trying all these different ways to make different styles of music but to see the growth, you could see the kernels of the stuff in the beginnings and now you can see the growth and that just comes from working at it for a while."

Hannah, Tim, and Harry uploaded 'Edge of Town' to triplejunearthed.com in May 2016. We know the rest of the story.