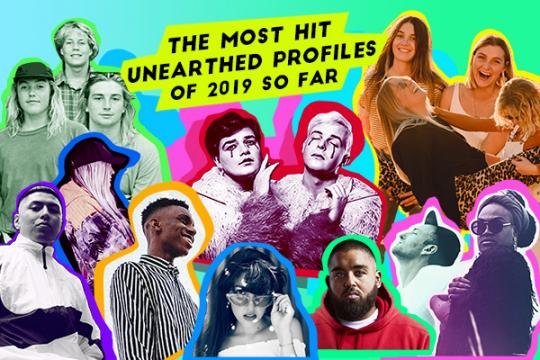 As part of triple j's Mid-year Report for 2019, we're checking in on the new artists on triplejunearthed.com that you've been loving this year.

These are the most hit artist profiles of the year so far - the acts who've stood out to you because of their great Unearthed uploads, their impact on the radio, and their presence on social media.

They're all artists who have uploaded new music in 2019, and they're all doing their part to shape the future of Australian music.

Our 2018 most-clicked Mid-year list featured names like Slowly Slowly, Ruby Fields, and G Flip - and keep an eye out for some repeat entries this year, too.

Stevan’s has a glo-th spurt in the past 12 months. We first met the smooth-crooning Wollongong teen during Unearthed High 2018, when he was a ball of potential with evident songwriting chops and a clear path to asset status. He’s spent this year fast-tracking his growth, copping record deals from here and from overseas, touring with Winston Surfshirt, and coming at us with his best song to date, ‘Timee’, in April. Present’s bright, future’s brighter.

‘Gong gang Cry Club kicked off 2019 by moving from their coastal NSW hometown to Melbourne, followed it up with a true hit in ‘DFTM’ and an Unearthed Feature Artist spot a little later down the road. They didn’t stop there – in fact, they pivoted. New song ‘Two Hearts’ is a pop banger from a duo who have proven versatility at their disposal, which gives us great confidence that exciting things are on the way.

We hadn’t heard much of Gippsland’s The Paddy Cakes before 2019, but they arrived in our ears with a real strong song called ‘Depressing All’ in February. We featured it back then on the Unearthed Podcast, and they chucked us a couple more great songs over the coming months. They finished up an East Coast NSW tour in June, they’re building a strong and supportive fanbase, and we’re looking forward to their next instalment of Kooksy indie rock.

These funky homosapiens make really immersive pop music, scoring 4.5 stars from Bridget Hustwaite for their upload ‘YOU’ in February. Their music’s characterised by a fashion forward approach to arrangement – basically, dressing up their songs in luxury and couture, instead of slogan shirts that say like "Live Laugh Love", or "World's Best Nan!" – and audiences have been super taken by it, clicking thru for their expressive pop fix.

We’ve only gotten one song from Maz Green in 2019, but what a song it is. It’s called ‘Somewhere Else’ and we love it because it’s a graceful and distinct pop offering that plants its flag with a bite-sized bassline and blooms out into a bed of strings and keys and falsetto. Everything old is new again, and Maz brings a new flavour to classic songwriting.

Surf Trash washed up in the shallows of triplejunearthed.com last year, and have landed on this list with a flotsam of strong uploads in 2019. The Newy trio have already played with Ruby Fields, and have a tour with Gooch Palms in the pipeline for this August, and they’re drawing a lot of love for their brand of slacker indie. Look out for ‘em in Unearthed High too – for all their success, they’re still puppy gromdogs!

‘Let’s Forget We Were In Love’ is Stellie’s only upload of 2019, but it was substantial enough to score her a spot in our top 20 most-clicked. The song has this “stop-what-you’re-doing” quality to it: it beckons you to google, or check @triplejplays on twitter, or add it immediately to your playlist to make sure you can come back to it. Mostly it’s because of that chorus – one of the best of the year on Unearthed – which is absolute caviar (in the “opulent, delicious and rich” sense of the word, and not in the “weird fish eggs” sense of the word). Anyway, words can mean two things, hopefully there’s more caviar from Stellie on the way.

Hooligan Hefs is the kinda dude who demands extra consonants. Just check the reviews on his Unearthed profile – Celline Narinli says his music is “sickkkkkkkk” and Claire Mooney reckons his song ‘No Effect’ “goes hardddddd.” You get the idea – his songs are fast and furious, ripping up the handbrake and doing mad doeys on your mum’s front lawn. His following is growing, too; ‘No Effect’ drew heaps of new eyeballs to his Unearthed page, and also popped off on streaming services, clocking up more than a milli streams.

Cenny Coast rockers The Witching Hour have had a big year on Unearthed, generating a lot of groundswell and support through their growing socials. They’ve put up two songs this year, both combining hard rock and blues in a way that’s crunchy but also a bit haunting. It’s like early Silverchair meets Creed at their zenith – and if that sounds like your jam, dive in.

Good boys Good Doogs continue their upward trajectory after a 2018 that saw them as the #3 most played act on Unearthed Digital Radio, and in the Hottest 200 with ‘Want That’. The hard-touring WA ledges came back with two more heaters in ‘Nobody/Alone’ and ‘How I Feel’, and also spent some time chatting with us about whether or not they need to sign to a label. Doog on, dudes.

Unearthed High band Basslines and Beartraps are doing it organically, copping a lot of hits on their Unearthed page after some big social campaigns. Their song ‘Lions And Tigers And Bears’ is about going to the zoo and letting the animals free, which feels altruistic and also dangerous. They’re hitting laidback, reggae indie vibes here; like a more formative Winston Surfshirt.

On Facebook we said that this dude sounded like Matt Corby meets Dave from Gang Of Youths, and you guys kinda did the rest. Debut ‘Everything’ is a long walk down the street you lived in as a child, tactile and unblemished in your memory. He’s a beautiful singer and a talented songwriter, and there’s evidently much more to come. Hopefully soon.

Leonie Kingdom is an artist who’s forced down the door, jumping from #14 on last year's list all the way up to #7 this year. The raw energy of her hustle has seen her find her audience with songs of sadness, home and passion. At it’s strummed core, Leonie’s music is essentially indie-folk but between the sparseness of production and a voice that could silence a crowded room, Leonie’s found her lane. It’s classic songwriting and royal recording and we’re all just glad to be part of the Kingdom.

Double J's Tim Shiel described Electric Fields’ music as “relentlessly joyous”, and there’s not much point using any other adjectives, because you won’t do better. The duo – brothers – merge living traditional Aboriginal culture with electronic music, and they stand out because of it; their song ‘2000 and Whatever’ was a finalist for Eurovision this year, and Bridget Hustwaite has been a big supporter of the song on Good Nights. Bottom line? They’re great, they’re fun, and they’re super authentic. Couldn’t ask for anything more.

When Triple One took out our Listen Out competition in 2018 they had a growing but undeniably fierce fanbase. Nearly twelve months on and they’re on of the hottest acts in Australian hip-hop. They gave us fire in 2018 with Showoff but the single they would go on to drop the following March showed us a different side to the Sydney rap crew. It brims over with empathy and hurt and suddenly we knew that the flippant, firebrand four-piece was that and more. They’ve got hooks, they’ve got bars but they’ve also got Heart. That’s Triple One.

Adrian Eagle’s been around for two years but it feels like a firm dozen. He’s cut his teeth touring around Australia with the likes of the Hilltop Hoods and his positive message soul-pop has resonate around the nation. It’s almost hard to believe we’ve still only had two singles from the Aussie Eagle when he drops them, they impact. Hard. His newest single A.O.K was a hit straight out the gates and it wasn’t long after that track hit the air that he delivered one hell of a Like A Version. No surprise that users have been searching out his profile this past six months. Watch this Eagle soar through the second half.

Pop Punk is (and I can’t stress this enough) NOT dead. Bands like Sydney’s Yours Truly are riding a new wave of mighty melodic power that’ll hit you with big vocals and bigger choruses. We named them as @One To Watch for 2019 and they’ve no disappointed, ripping mega sets at UNIFY in Victoria and Download Festival in the UK. We thought they’d set a high bar in with their first upload of the year ‘Circles’, added to triplejunearthed.com in January but we had no clue that they still had a song like ‘I Can’t Feel’ in the tank. They’ve sewn the seeds for three years and now Yours Truly are harvesting a rich crop.

We knew we had something special as soon as Dulcie popped up in the Unearthed listening queue. Straightaway, they reminded us of a couple of triple j’s biggest O’s -- Odette and Ocean Alley – with clear a clear gift for melodies and an even clearer gift for shredding it like mad dogs. They’ve toured with Great Gable and Polish Club so far this year, and backed up debut ‘Fall’ with another winner, ‘Own Ground’. Big things achieved, but also, big things still to come. We’re gonna be doting on Dulcie for a long time.

At this point, if you’re unfamiliar with, Tones And I, we’re not sure what to tell you. She’s the Byron busker we discovered in February, who’ll play Splendour for Unearthed as one of 2019’s biggest breakout stars. ‘Dance Monkey’ and ‘Johnny Run Away’ have been all over the radio, and Tones has won over millions of ears with her loops and storytelling. She’s the most clicked artist profile on Unearthed this year.