The Most Hit Unearthed Artist Profiles Of 2018 So Far 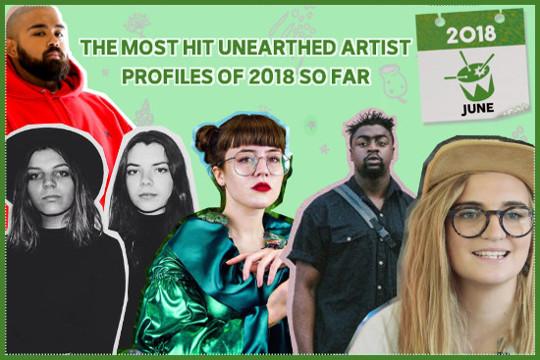 As part of triple j's Mid-year Report for 2018, we're checking in on the new artists on triplejunearthed.com that you've been loving this year.

These are the most hit artist profiles of the year so far. They're all artists who have uploaded new music in 2018, so you can glean a bit of insight into the ~future direction~ that New Australian Music is taking.

Want more Mid-year Report? Check out triple j's Most Anticipated Albums still to come this year, as well as 10 Aussie Songs that blew Declan Byrne away this year, and Double J's list of the 20 Best Albums of 2018 so far.

The Most Hit Unearthed Artist Profiles Of 2018 So Far

They come from Canberra, but they’re raised on the ‘80s. Red-lipstick synthpop for driving through midnight’s dark.

This year’s breakthrough punk rock discovery. They are vital, and they’re gonna be big.

He’s the "Aussie, Aussie, Aussie Aussie Eagle" who won us over with soul-infused tunes and inspiring story. Can’t wait for more from this SA star.

Carla Geneve is articulate AF. The next in a long line of quick-witted wordsmiths – see Barnett, Courtney and Donnelly, Stella.

Huge swell of fan support lands them a spot in this list. Meat and three veg indie rock act with plenty of square meal appeal.

13) Funk Dancing For Self Defence

Building a loyal fanbase in Melbourne, making Moe Szyslak proud in the process. Rumoured to hold band practise in a Car Hole.

Popped up last year singing the hook to Baker Boy’s ‘Cloud 9’, and hit us with the line and sinker on his excellent debut solo tune. Watch out.

You know who. Rubes has uploaded a grand total of three songs to Unearthed, and all of them are special. So is she.

The 2018 Artist To Watch is having a career year. She’s already great: watch her get better. #YOEG

A sold out Aussie tour indicates the future’s bright for this one: he’s one of the best new songwriters in the country.

Canberra team who’ve stepped it up in 2018, producing their best songs so far. Their greatest influences? “Women, and depression”. Same.

‘Museum’ might be this year’s most contagious new Australian song. None are immune.

Look into our crystal ball: the future is all Kwame. The Sydney rapper is excellent, and he’s been everywhere this year – including the 2018 Splendour Lineup as our Unearthed winner.

Angie blew everyone out of the water with ‘Slow Mover’ last year, and her follow-up is just as strong. Unearthed Music Director Dave Ruby Howe says McMahon’s ‘Missing Me’ is his favourite new song of 2018.

Could it be anyone else? She arrived with the idiosyncratic and immediate ‘About You’ in February, and followed it with ‘Killing My Time’ later in the year. Both are excellent, and indicative of big things to come: G Flip is what drum dreams are made of.