Is this the most versatile music maker on Unearthed? 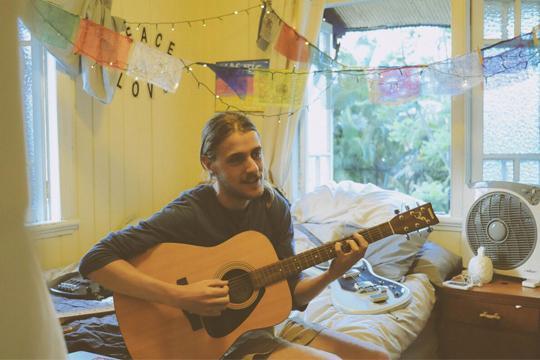 It’s been pretty hard to miss Connor Brooker on triple j Unearthed this year. Literally – the Brisbane songwriter is a 205cm tall giant with melodies to match, and he’s been at the helm of four very different musical projects we’ve been loving on in 2015.

Shifting gears between surf rats Pro Vita and noise pop duo Bugs since the middle of last year, Connor’s been making us aware of his versatility as a songwriter for a hot minute. This year saw the birth of another two solo projects – the synth-laden electronic warble of White Wash, and also a series of lo-fi acoustic tunes released under his own name. Back in July, we named him one of our 10 Quiet Achievers of 2015, and since then he’s set about making lots more noise.

"Pro Vita formed on the Sunshine Coast," he explained to us recently. "That band's surf pop, real lighthearted songs. Then I've got Bugs in Brisbane which is more punk, guitar-laden hook pop. In my spare time I do White Wash in my bedroom. It's like trap sad-boy, hip-hop/RnB stuff. Then when I get bored of that and I want to play on a real instrument, I play solo stuff as Connor Brooker. It's bedroom lo-fi music, super-relatable, super-cheesy, but it's good! Listen to it. Please!"

His prolific output is mirrored only by his consistency. It seems like every song he’s released this year has been a winner, showcasing not only his obvious gifts for melody and production, but also his ability to write genuine, relatable lyrics.

We’re not talking about one or two great songs from each project, either. Look at the stats:

Even though at a certain point the numbers kind of speak for themselves, here at Unearthed, we had to find out more. Is Connor Brooker the most versatile music maker on Unearthed at the moment? He graciously invited us into his bedroom in Brisbane to explain how his brain works:

Hear more of Connor’s music below.

snaps in this article courtesy of big legend Mitch Schade.