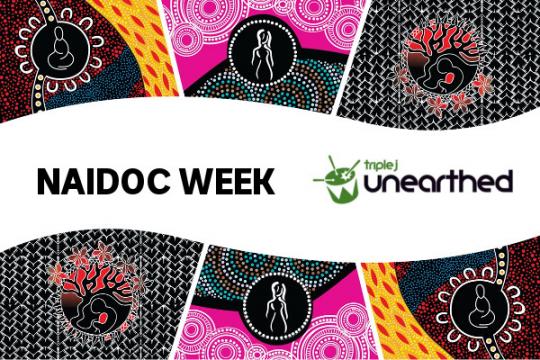 We’re inviting three amazing Indigenous artists to collaborate on a new song! In the past we’ve invited acts like Kuren and Denni, and Emily Wurramara and Steady to team up on a new track, but this year we’re going one further and adding a third collaborator to the mix: we’re teaming Alice Skye up with Ziggy Ramo and Trials from A.B. Original!

They’ll keep you up to date about the collab all though this week on triple j Drive - track their progress here - before the collab is finished and uploaded to Unearthed on Thursday afternoon!

Tasman Keith is your Feature Artist all this week on triple j Unearthed! He’s a Gumbaynggirr man continuing the traditions of his people by telling stories through his music. His new song is ‘My Pelopolees’ – an ode to his grandfather William Jarrett, and his uncle, Uncle Spits. It’s also about triumphing in the face of adversity, and the socio-political conditions imposed on Indigenous Australians.
Hear it:

This Wednesday, you’ll find out which Indigenous Australian artist is playing the National Indigenous Music Awards thanks to Unearthed! Our list of past winners is immense: Baker Boy, Thelma Plum, and Kuren count among them.