Nice To Meet You: our first interviews with Flume, Amy Shark, more 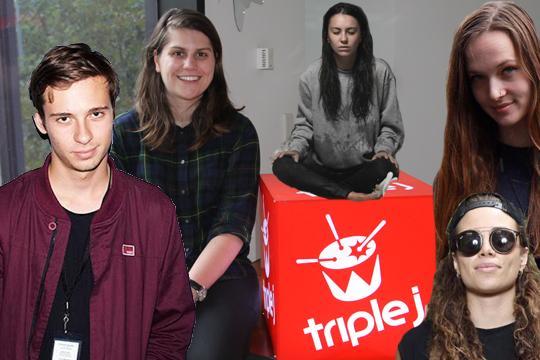 Among the accolades, we saw the top three spots each go to artists discovered here on triple j Unearthed dot com, as well as a bumper 26 Australian acts who have uploaded to Unearthed making their way in to the countdown. Throw in an additional 33 artists first heard on Unearthed who made the 200-101 countdown, and you’re looking at a stellar list of independent Aussie songs from 2016 voted in by you.

Instead of hitting you with more stats or a dense thinkpiece, we thought we’d do what we do best and let the artists speak for themselves. We’re taking you back to their first ever interviews with Unearthed – so you can meet them all over again. ~memories~ below:

Your 2016 Hottest 100 champ came to our attention as a nineteen-year-old producer known for his lid-flipping, hypercouloured electronic jams like ‘Possum’ - the song that won him a spot on the 2012 Field Day festival thanks to Unearthed. After that, it was on to Sleepless, Splendour, a J Award, world festival domination, and eventually ‘Never Be Like You’ – your favourite song of 2016. Here’s lil Harley back in 2012:

Back when we met Tash Sultana, she building a small but feverish online community of fans online thanks to her obvious talents and DIY video jams. One of those jams – ‘Jungle’ - came in at #3 in the Hottest 100 this year, and another, ‘Gemini’ was #32. Before all that; before she was our Unearthed J Award winner, and before she played our 2016 BIGSOUND showcase, she was busking around Melbourne, working on her craft, building her reputation: here’s that Tash, sitting on a step ladder in the triple j studios, and talking to Unearthed about her origins:

‘Adore’ has become a national obsession, and deservedly so: it’s a deftly-produced, unrequited anthem full of lush sounds and painfully human lyrics. Amy Shark was our Unearthed Feature Artist earlier this year, and we’re stoked for her journey to continue: here she is talking about ‘Adore’, ditching the family name, and her obsession with Great Whites.

You’ve heard the song, right? Good. Here’s Gretta Ray – who made the highest ever debut entry in the Hottest 100 by an Unearthed High winner – on the origins of ‘Drive’:

One of the year’s most affable new songwriters, Alex Lahey turned in a whole EP full of proper tunas in this year’s B Grade University. One of those – Splendour In the Grass highlight You Don’t Think You Like People Like Me – hit home in the Hottest 100 at #97. Here’s Lahey at this time last year; kinda feels like a whole world away, right??

Massive props to everyone who scored big in the Hottest 100. Read up on all the important stats and info over here!