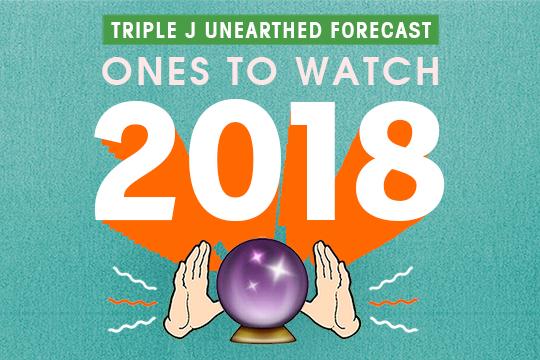 Here at triple j Unearthed, we've been *deep staring intensifies* at our crystal balls, trying to work out what on earth a blue blood supermoon is, and making a bunch of predictions for the year ahead. Below, you'll meet our Artists To Watch for 2018 - ten wonderful new acts we reckon you need to keep an eye on this year. You ready? I sense good things in your future.

Carmouflage Rose makes dancehall for the small hours, tribal trap for kick-ons back at yours. He’s from Brisbane via Zimbabwe, and he’s all about infusing his own cultural climate into the current context of hip-hop in Australia. What’s cool about that approach is that these are original sounds for Australian artists and audiences – simply, nobody else in the country is making music like this. His latest track ‘Late Nights’ went wild at our Unearthed Bigsound showcase in September, and also landed at #198 in your Hottest 200-101 of 2017. We’re real excited for what’s to come.

Eilish Gilligan is a pop premonition born under a full moon. She’s the kind of artist who breathes in oxygen and breathes out aesthetic, combining inimitably warm production with a wit and depth of perception that makes her music both deeply relatable, and also boldly individualistic. Take recent single ‘S.M.F.Y.’ as a prime example – “I’ll be a beauty, be the best thing you could ever turn away,” she empathises over bath-bomb of synthlines, in a way that hints at a horoscope of wide-eyed optimism, but ultimately, recognises that The End has arrived. It’s this extremely human duality that makes Eilish Gilligan such an effective communicator, and such an exciting artist. We reckon she’s gonna Go Completely Off in 2018.

Her name is JEFFE, but that’s about all she has in common with Channing Tatum. Her debut offering ‘WHOEVER YOU LOVE, i’m COOL’ was dropped at our doorstep in a soft blanket by the Australian Music Stork back in November, and it was enough to convince us that this daydreamy Sydneysider is more than worth paying attention to. The song subsists on snoozy subterfuge, drawing you in with floaty textures and brass samples, entering upward via the fingertips and sideswiping with an exquisite honesty bomb: “I’m the best I’ve been in ages – so, whoever you love, I’m cool.” It’s devastating enough to flatten, and cool like a carefree nod to your ex at a party. We’re excited about all things JEFFE this year.

Kaylah Truth set herself up as an Artist To Watch with a succession of huge tunes in 2017. The Brissy rap mogul has been doing it her way for ages – “I was the one who did the work to pay the rent,” she raps on the highly-autobiographical ‘Wave’, and has rounded into superb form with October’s certified banger ‘Like Crazy’ also under her belt. When she speaks, she speaks from hard-won experience, and you’re rewarded for listening good. Hers is an important voice, and one to be heralded as the year progresses.

Yes – they are a lo-fi, hard-sluggin’ Sydney rock band called Pist Idiots, and, yes, to a certain extent their rambunctious and mulleted aesthetic is indicative of the music you’re about to hear. But you might be surprised to learn that this is one of the most emotionally resonant new bands in the country, who make their mark as much through evocative honesty as they do through being kewl larrikins. A hurricane song called ‘Leave It At That’ arrived in our ears at the beginning of December, and it’s their best and most vibrant track so far. It’s a no-BS boiler, and hopefully the beginning of big things this year.

I’ve you’ve been listening to triple j or Unearthed Digital Radio over the past six or so months, we’re pretty confident you’d have caught some cool music from pop warrior Samsaruh. She’s just 19 years old, but her songwriting boasts an uncommon amount of sage confidence and fullness. It’s kind of unreal how polished ‘Golden To Thrive’ and ‘Beautiful Killer’ are, and we know she crushed it as our Unearthed competition winner opening up Falls Festival in Lorne over the New Year. What’s next? More new music, and we can’t wait to hear it.

When they’re not foraging for salty tears in the Forest of Emo, Melbourne four-piece Slowly Slowly are deftly positioning themselves to be one of 2018’s biggest breakout bands. Songwriter Ben Stewart floats in a slipstream of never-ending lyrics that balance hyperrealism with a clever stream-of-consciousness, convention-be-damned. 2017’s ‘Aliens’ is the first offering from a new album due out this year, and while there are hooks aplenty, there’s not really a chorus to speak of; and it’s that willingness to break the rules of songwriting that makes Slowly Slowly such an interesting band. They won our Beyond The Valley competition in December, and we’re excited to watch them pump out Unconventional Anthems at every turn as 2018 unfolds.

Sweater Curse are everything that’s good about contemporary Australian DIY in 2018: double-glazed donut harmonies double-dipped in melancholia, with a hint of outer-suburban Brisvegas to taste. They’re a live force, already appearing on bills with hell cool legends like Camp Cope and Iron Chic, and scoring a festival spot at Secret Garden later on in 2018. There’s more to come, and it’s all exciting - listen out for more like 2017 standout ‘Don’t Call Me’ p soon.

Unearthed Laneway comp winner T$oko hails from Harare in Zimbabwe but is now based in Perth. He does bassy, boom-bap rap music better than just about any other up and comer in the country. His flow’s the first thing you’ll notice: he runs the full gamete of deliveries and does it all effectively, whether he’s slicing his phrasing like sashimi or going full boonta spitfire. There’s a bit of everything on ‘Hakuna Matata’ and ‘4th Quarter’, both uploaded on the same day in November 2017. He’s also an elite storyteller and songwriter, and that’s part of what makes him stand out so significantly – yeah, he can go punch-for-punch as a dope MC, but he’s also got the cure for what ails ya with slick hooks and vibe curation. Keep an eye on him.

You know that thing where you pierce a poached egg, and then, by some small miracle, the Yellow drizzles sensuously out over the rest of your breakfast at Just The Right consistency? Meet Willaris. K. He’s a NSW North Coast producer who produces beats so thick and textured that they might as well be double-yolkers. It’s the dankness of a mossy swamp meets Harry Potter and the Deathly Hallows, because it’s cold and scary but also outwardly elysian and magical (RIP Lupin, you crazy werewolf). Willlaris K is sick, his live show bangs, and we’re excited for his Defence Against The Dark Arts to continue into 2018.