Pieces of The Middle East 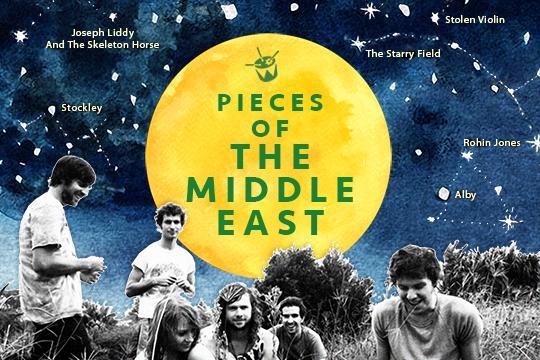 When The Middle East uploaded a pair of tunes to triple j Unearthed in October 2008 to rapturous five star reviews, The Townsville spawned collective were quickly on a path to widespread acclaim and fan obsession. The group copped a J Award win the following year, two Hottest 100 entries, overseas tours including festival spots at Coachella and Glastonbury and more plaudits for their 2011 debut LP I Want That You Are Always Happy. That same year, the band abruptly announced their dissolution with a final performance at Splendour In The Grass, leaving fans feeling shocked and saddened to see a band go out arguably before reaching their full potential.

In the five years since The Middle East’s untimely break-up, the band’s sprawling membership has been characteristically creative with a solo projects and new bands. Some of these new projects build upon the DNA of The Middle East’s music, and others mutate into unexpected sounds like electronica, funk, hip hop and hardcore. Bree Tranter, Joseph Liddy And The Skeleton Horse, The Starry Field, Skeleton Jack, Stolen Violin and Rohin Jones have all spun off from The Middle East’s core members, casting a spiderweb across Australian music that continues to spin out new tunes (hit play on this playlist for proof). The band’s legacy and influence can be regularly found in new acts uploading their music to Unearthed, whether it’s collaborating with prolific producer Mark Myers in his Cairns studio, or simply carrying the torch of The Middle East’s poignant and vulnerable songwriting.

For Pieces of The Middle East, triple j Unearthed’s Dave Ruby Howe connects the dots between the post-TME acts that you can hear on Unearthed, as well as picking the brains of former members Bree Tranter, Joseph Ireland, and Rohin Jones about the disbandment of The Middle East in 2011, their new music, and recent discussions of a reunion. Listen below, and get little bit of key info from Rohin Jones too:

Rohin Jones on the band’s break up
“A part of the decision to not continue to play music together was to preserve the friendships...the pressure of the environment and the dynamics in the band was causing friction. Seven creatively capable people...you put all those people together and it makes a complex situation. It was a hard but a very important decision to make.”

On reunion talks...
“We got together late last year and just talked about the potential [of reuniting The Middle East]. It's something that for us just has to feel right. Coming back together and writing something as a complete group of people in that context is dependent on us all arriving at that desire at the same time. There have been songs that I’ve written that I’ve thought, ‘that’s a Middle East song’, and keeping that is really nice for me. I don’t think anyone in the band is going ‘that can never happen again’.”

Pull Apart The Pieces Of The Middle East