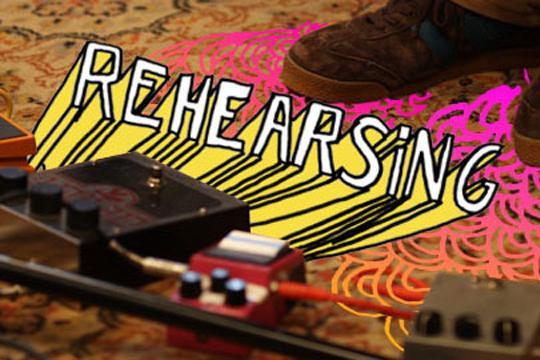 “Every band has to rehearse. Just do it right. Make sure everyone in your band who says they can rehearse on a specified date does rehearse on that date. If not, just fire them. But really, rehearsing is a time for your band to practise and get to know each other better. If you rehearse properly you’ll know what works and what doesn’t and you’ll know just when to let your surly drummer out for his break.”

“As necessary as rehearsals are for a band, it’s important not to overdo it. If you’re rehearsing for hours on end, you’ll end up over-thinking what you’re doing. We hadn’t played together as Frenzal Rhomb for around 18 months, and before a big tour we all got together and played for about four hours. That was perfect. Any more time and we would’ve ruined it. You’ve got to learn when enough is enough. Leave the garage and go play somewhere, or else you’ll spoil the magic.”

Okay, you’ve got your band and you’ve come up with a strikingly original and altogether awesome name for the group. Great. But unless you’re a Milli Vanilli tribute band, you’ve got to get together and work on some songs. Rehearsing is important for all artists, but especially for a young band as it will give you the opportunity to refine your skills and become better acquainted with your new band members. So where do you rehearse?

If you or one of your band members has access to a basement or a garage then jump in and get practising. Just make sure that the parents who reside over your band’s potential lair are cool with you using it, of course. Try to sound proof it as much as possible, so you can rehearse for extended periods without making any neighbourhood enemies. As Nick Craven of Canberra-based rockers Hancock Basement (winners of triple j Unearthed’s Trackside competition in 2008) can testify, your soundproofing doesn’t have to be pretty, just good enough to lock in some noise. “Work with what you’ve got. Putting up mattresses and blankets against walls and windows helps dull the sound, as do egg cartons.” That should get you started, but when you’re ready to move on to something more professional take advantage of the Internet and websites like that of John Sayers, a studio design guru who will tell you how to take your space to the next level.

If you’re holding onto a bit of money and want to rehearse in comfort then look into hiring some professional rehearsal spaces. Having spent ample time in such spaces, our very own The Doctor is quick to point out that although useful, they don’t come cheap. “They can cost a lot. And if you’re just sitting there trying to make a song out of nothing, you’re not only wasting your time, you’re wasting your money.”

Speaking of money, it’s time to invest in some gear for the band. By now you’ve hopefully all got your individual instruments, but as a band, you’ll have to fork out for some essentials. “Definitely get some cheap mics, some mic stands and most importantly a PA to practice with,” Hancock Basement’s Nick says. “Look in your local classifieds and on the internet for cheap deals, or strike a bargain with your music store of choice. You can find great stuff.”

Following that, it’s up to you and your band members to agree and commit to a rehearsal schedule. You’re all going to be busy with school and homework, but if you can come up with a realistic schedule for band practice, rehearsals will be rewarding.

Yama Indra (who collaborates with members of Young & Restless and Lost Valentinos under the alias of GLOVES) also agrees that a steady rehearsal schedule can do wonders for a young band, providing you stick to it. “We would rehearse a lot in Damn Arms. When we first started we were doing around three nights a week. Everyone was always there and they were committed. I can’t imagine any band going far if they can’t at least agree and commit to rehearsal,” he says emphatically. “We only achieved an understanding of each others’ styles from rehearsing so much.”

Now that your band’s itching to rehearse, it’s time to take the next step and get down to working on songs. Let’s get creative!

“Our rehearsals are good for band input. I’ll bring in a song that I’ve been working on at home and once everyone has contributed and tweaked things to their own style, it can end up looking very different. That’s healthy and I think it’s how you write good songs.”