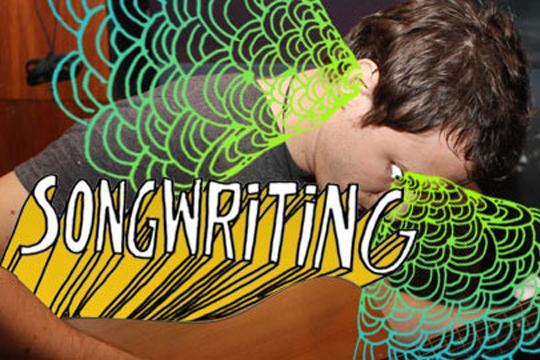 “Always be thinking about songwriting. Even when you’re not rehearsing or playing with your band, keep lyrics and chord progressions flowing through your mind. If you think of something, record it right away on one of the many pieces of technology we have integrated into our lives. It could turn out to be shit, but if there’s one piece of gold in there, then you’ve got something.”

“One piece of advice that I recommend all bands stick to is this; don’t ever buy a rhyming dictionary for yourself or anyone who writes lyrics in your band. First of all it’s just plain insulting if you’re giving it to someone who writes lyrics. It’s basically like saying that that person is too stupid or moronic to think of words that sound like other words. And also, you’re in a band, not writing limericks for ZOO magazine. Just don’t do it.”

Now you’re onto songs and the logical place to start is with covers. Instead of trying to be a creative powerhouse straight off the bat, take it slowly and toy around with other peoples’ songs. It’ll allow your band to work on something that’s fully formed, as well as figuring out how this whole “music” thing actually works as you deconstruct notes and chords with your ears.

"If you start messing around with some covers, you'll understand songwriting," triple j's The Doctor says. "From there, just take a song you're comfortable with, change the chords a little bit, tweak the lyrics, and there you go! You've just written a song." Putting aside the Doctor's tongue-in-cheek tone, he is actually correct. You've already been inspired by your favourite artists to form this band, so keep funnelling that inspiration from them for your first songs and lyrics.

Speaking of which, writing good lyrics is something that stumps a lot of bands, both young and old. There are many potholes for bands to fall into when it comes to writing lyrics, so try to avoid the cliches that everyone writes about. “You can only write about what you know,” says Miska Mandic of Sydney art-rock squad Teenagersintokyo. “Insincere lyricists are completely transparent. Use your instincts and steer clear of anything naff.” If you’re set on diving into a common topic like love, think of your own unique take on it. Keep it interesting and you’ll come out unscathed.

Likewise, a lot of great songs can begin their lives in a simple jam session, where you and your bandmates throw out ideas until something sticks. “We’re always open to trying new things with our songs,” says Birds Of Tokyo’s Adam Spark about his band’s creative process. “We just try to develop our ideas and see what happens. It’s important to for us that we don’t say ‘no’ to trying a different style or genre when we’re writing.”

Of course, think about both sides of the coin here, as The Doctor explains, jamming is not always going to produce results. “If you’re putting everything into jamming, your songs will suffer. Not everything can come out of sprawling bass explorations and the introduction of bongos into your repertoire.”

You've toiled to craft a solid set of songs and it's important to protect that hard work. Australian laws are there to assist you, and in accordance to a 2005 legislation, there is no formal copyright registry. Once you’ve created it and recorded it, that song is copyright protected. It’s wise to know the policies and how they work for your band so a useful resource is the Australian Copyright Council. Otherwise, discuss creative protection with a lawyer.

While we're on this administrative bent, you should also consider undertaking other measures to protect your band such as registering your band name (http://www.bandname.com) and creating a business for yourselves so that when the time comes, you can earn money legitimately (Australian Business Registry - http://www.abr.gov.au). Additionally, it'd be a good time to discuss writing up a band agreement, to clarify who owns what in the band. Although it sounds grim, if someone leaves the band, they may be entitled to retain songs and materials written whilst still an active member. You can avoid a lot of sourness and hurt feelings if you be smart and mature about it and have things in writing early on.

From here we leave the confines of your band’s space and march straight into the world of gigs. Join us, won’t you?

“When La Roux began, we were doing stuff that was acoustic and folk based, because that’s what I had listened to while growing up. But we could never get the songs to work quite the way we wanted. At that time, we were both getting into more electronic music and we decided to add that influence to the songs. Immediately everything changed and it felt right. I think all bands need to try new things when something’s not working. Pull from a lot of influences and give your songs some edge.”