South of The Mainland: Punk in Tasmania 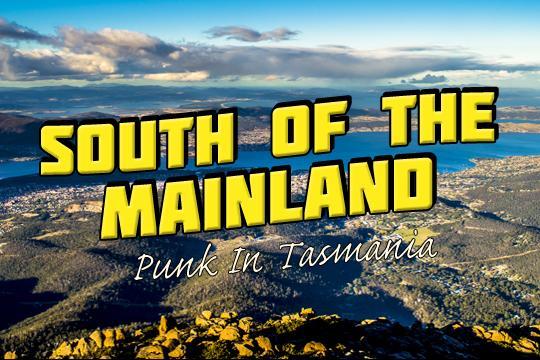 A couple of quick facts about the state of Tasmania:

1) It is separated from mainland Australia by the Bass Strait, noted for its frequent cold fronts, violent south-westerly swell, and formidable wind speed.
2) The most recognisable Tasmanian mammal is the Tasmanian Tiger. It has been extinct for 80 years.
3) Arguably the most recognisable living Tasmanian mammal is former cricketer David Boon.
4) The northernmost point in the state of Tasmania is literally called Cape Grim.

Before you get all, “we get it, It’s cold, It’s far away from mainland Australia, heaps of water vessels completely disappear every year attempting to cross the Bass Strait” on us, consider this piece of redemption: Tasmania might also be the biggest contemporary breeding ground for some of the country’s best punk music.

Now more than ever, they’re banding together, rehearsing in heated cabins on mountaintops, releasing standalone singles and 7” EPs, and reclaiming the national music spotlight as part of what feels like a distinct and unified movement. Like dogs to streetsigns, Tassie artists are marking their territory right across Australia, pissing all over preconceived ideas about what it means to be in a band from south of the mainland in the process. They’re doing it together – making record labels to release each other’s music, forming new bands to showcase each other’s strengths as songwriters. They’re doing it at speed, too: these days, barely a week goes by here at tripljunearthed.com where we don’t find a great new song by a Tasmanian band. We made you a playlist as proof of this.

“There’s a pretty tight community down here,” Pat Broxton of Launceston four piece The Sleepyheads tells us. “Everyone’s really supportive: we get asked to play shows that we wouldn’t necessarily fit on [in mainland Australia] just because someone in the headlining band likes us or likes our songs. Our friends the Saxons from Launceston are just some of the best songwriters we know, and then in Hobart, there are faster punk bands like Knife Hands, and we play a more indie style, but we’ll play a show together. Nobody’s judgemental of the genre. We all just want good music to be on the bill.”

Damn the man, save the empire, play shows with bands you love and care about. The Sleepyheads are relatively new kids on the block – their first upload to Unearthed was in March of this year, but they’ve been widely embraced by the community Croxton waxes about. In their short run as a band they’ve shared bills with Australian acts like The Bennies, Camp Cope, Ceres, Third Degree and Bad Pony, as well as internationals The Hotelier, Jeff Rosenstock and Antarctigo Vespucci. Listening to their music, it’s pretty easy to see why: it’s relatable, laconic, melodic punk rock. Take their latest, ‘Spiders’, as an example, and take particular note of the way Broxton manipulates a profoundly Australian expression in his lyrics:

“We live on Mt. Wellington in South Hobart,” she explains. “It’s the mountain at the back of Hobart, where it’s already snowed three times this year. We’ve got enough wood to last us through the winter ... I hope.”

The mountain sits about 1300m above sea level, and, if its residents are lucky, it’ll hit the expected average high temperature of about three degrees Celsius this month. You truly don’t want to know how cold it gets, but you can hear it in Heart Beach’s music. Jansen explains:

“We write about drudgery, and about the mundane aspects of day-to-day life.  It’s even reflected in the way we write: we tend to start on bass, it’s like starting with a drone. It gives us a foundation to start writing around, and I think that the fact that the bass does drive the melodies and the guitars are used over the top, it sort of makes our music sound heavier and more downtrodden. Even our happy songs are a little bit sad.”

In a lot of ways it makes too much sense: punk, as a cultural movement, has long been a modicum for expressing isolation, longing, misrepresentation and anger, and it should come as no wonder that a region known for its geographical isolation and coldness is a conducive environment for some of the most considered and insular-sounding punk songs being written in Australia right now.

“I’m hesitant to say it’s all because of the cold,” Jansen says. “But we definitely are poorly insulated. Sometimes it comes out in the way we shout, or sing, in the songs. It speaks to the despondency that sometimes comes from the daily grind. I’m sure that’s a thing outside of Tasmania, but maybe it is something that runs as a theme through music down here.”

Perhaps the most impressive part about the influx of great punk music coming out of Tasmania is that so much of it is happening independently and of its own volition. Tasmanian artists are recording their own songs at home, releasing them on their own labels, and booking their own tours right up and down mainland Australia. Two weeks ago, Heart Beach got back from an Australian tour that took in Hobart, Sydney, Brisbane, Canberra, Adelaide and Melbourne over. Last week we got their 7” in the mail – the cover art is printed on matte A4 paper.

“A lot of bands down here release their own material,” Jansen says. “A lot of that is to do with doing it exactly the way they want to do it. Other bands are connected to small labels both on the mainland and in Tassie. Wrong Place record and Rough Skies records down here in Hobart regularly release records by local bands. At some level, all bands are DIY, but people are getting in there and putting out their own material, pressing their own albums, organising launch shows, and in some way facilitating even more music to come from more musicians.”

It’s happening in Launy too:

“I record lots of bands on the side,” Broxton tells us. “We have one main recording studio here but I’ve got some gear and I’ve learned how to record because for a lot of bands going into a proper studio is out of their price range. All our tracks are recorded in my loungeroom. We’ve been influenced by lots of bands who’ve done a similar DIY thing over the years – Luca Brasi being one of the main ones.”

... and there they are. We suspect you’ll have a hard time talking to anyone about music in Tasmania without them dropping Luca Brasi as a point of reference. They’re still a pretty young band, so it’s weird to think of them as figureheads or trailblazers, but three albums into their career, Luca Brasi are safely at the forefront of the Tassie punk movement. They’ve been uploading to Unearthed for more than five years, and they were rewarded for their consistently engaging punk rock songwriting with a triple j Feature Album for If This Is All We’re Going To Be back in March. Last week, they crushed this Like A Version of Paul Kelly's 'How To Make Gravy' - making it totally their own in the process:

“Tassie’s always been seen as Melbourne’s backwards cousin, but we’re from Tasmania, and we’re having a crack, and it’s awesome,” Brasi singer Tyler Richardson tells us.

There’s no denying this. For a band to achieve the things that Luca Brasi have during their time together is no small feat. For it to happen to a band from Tasmania should not make it more impressive (“The internet obviously has made it easy for people to discover music they love from all parts of the world,” Richardson duly notes), but it does signify a shifting of gears; whereas in the past it was perhaps more difficult for bands from Tasmania to tour the mainland and drink from the chalice of a making stable income from music, now it is possible. But the fight continues:

“To be honest, there’s still a little bit of stigma,” he admits. “Like, we’re 'The Tassie Boys'. And we try to take that on board and brand ourselves with it instead of being resentful about it. All our merch has Tasmania on it, the banner that we play in front of is just TASSIE in huge capital letters. It becomes a badge of honour when you’re from somewhere like Launceston that’s not a capital.”

Indeed - it’s a badge emblazoned with all of the things that make Tasmanian punk music powerful, relatable, and vital.  The dark and the distance and – yes – the drudgery shape the way music is made in Tasmania, and bind these artists together. It’s a weird symbiosis, functioning both as a source of inspiration and a banner under which Tassie punk bands are united. Tasmania is community. Tasmania makes the wheel turn.

“If we lived anywhere else, we wouldn’t sound the way we sound. There are lyrics that we write that we wouldn’t write if it wasn’t as cold and dark as it is,” Richardson quips. “I feel like the only people that sledge Tassie now are the people who haven’t been here. How could you live anywhere else? We’re stoked about where we’re from.”