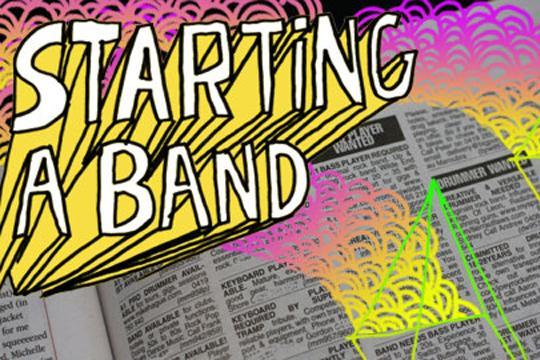 So, you want to start a band? Great. We, much like yourself, love music, and we always want to hear more of it. You’ve taken the first step and declared your intentions, but where do you go from here? Don’t stress, we’re here to help. Along with some helpful people in the know, we’ve come up with a go-to guide to take you through the process in making that dream a reality. Read on and let’s make that band!

The hurdle that you’ll immediately face is “what kind of band will it be?” As you immerse yourself in the music world, you’ll find a lot is beyond your control, but the motivation behind your band is completely, 100% up to you. Like psychedelic, tribal-infused rock? Want your band to write danceable new-wave indie songs with a twist of ‘60s surf-guitars? If that is what has motivated you to start a band then we say harness that passion.

It is of course best to start with what you know. Pick a handful of likeminded bands whose styles you admire and use them as points of reference. It also helps if you and your band members have a shared passion for the style of music you’re going to make, which leads us to the next un-skippable step in forming a band; finding other band members.

The people to complete your new band could be anywhere around you. So spread the word that you’re starting a band, and what your main influences are. Print up some flyers at school, tell all your friends (both physical and digital), or take a leaf out of Bloc Party’s book and print an ad in your local street press or muso mag. Keep searching until you find the right people who are passionate about the same things as you, musical and otherwise.

Tread carefully with inter-band relationships as well. Being in a band with your boyfriend or girlfriend can be totally great, like with married duo Mates Of State, who are probably the most adorable indie band around. Or, it can go all Fleetwood Mac and mess up both band and relationship. The essential thing to remember in this process is that you’re starting a band with people who you’ll be seeing nearly every day for the foreseeable future, and if the relationship sours, it’s going to kind of suck spending a lot of time with that person on a stage, in a cramped van, or in a rehearsal space.

Moving forwards, it’s time to pick a name. Don't listen to anyone who down-plays the importance of this step. Indeed, if you’re taking advice from someone who believes choosing a band name is superficial, drop what you're doing and back out of the room. That person will sell you on something dreadful and you’ll end up on a list of laughably awful band names alongside Clown Vomit, Clusterfunk, Smile Brigade, Killgasm, Ringo Deathstarr and Kaiser Chiefs. Honestly, you can't make that stuff up.

Living as we do in the Internet age, the power of a Google search is also something to remember. Learn from 2008's Unearthed High champions Tom Ugly, who at the time were dubbed simply [is] and despite some rather deafening buzz around their winning track, Cult Romance, were a difficult band to find on the ol' interweb. They swiftly changed their name and now a click of a button will take you right to them quicker and easier than ever.

Overall though, it really comes down to choosing a name that not only represents the band's members and its music, but it should also be a name that you won't get tired of as journalist upon journalist question the meaning behind it. After all, you'll hopefully be doing this for a long time.

“I really loved music, and I had to do something about it. It started out as just playing acoustic Weezer songs in my bedroom, but quickly I got the band together, and even though Johnny [Aherne] had never played bass in his life, it clicked on the very first day. Now we’re about to hop in a van and drive to Berlin. I still find it amazing.”