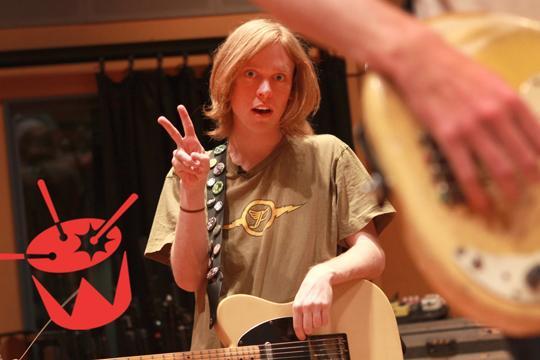 Recording in a studio is a good option for people who don’t want to invest in their own recording equipment or, who are looking for a more professional result and would like to be in the secure hands of an audio engineer.

How long does it take? You’ve all heard the stories of famous bands going away for months to record. If you’re using a studio, it’s most likely you’ll be paying by the hour so you probably won’t be taking quite so long. The best thing to do is to ask the recording studio how long they expect it will take. A demo CD of 3-4 tracks could be completed in one day but normally takes a weekend. Set aside one day for recording, and one day for mixing.

How much does it cost? This will depend a lot on how long you take. Low end studios normally charge between $40-70/hr for recording which will include a sound engineer. You could also get a day rate which is a little cheaper.

You will probably be charged extra for equipment loans and extra tapes or CDs so make sure you are know how much all the hidden extras will cost you. In particular, many studios can charge disproportionate amounts for CDs. A CD-R might cost $2 to buy at the local shop but to get a copy in studio might set you back $15.

Lots of studios generally record to hard disc, so it would be a good idea to invest in some kind of external hard drive you could back up your recordings to. You generally cannot take it away until you have paid the bill!

No such thing as a free lunch – or is there? Look for universities or colleges who offer sound engineering courses in your local area. Many of these courses need bands for their students to practise on and it can be a great way to get a free recording. You should be able to get a decent result, but it will probably take much longer than a professional studio.

How can I find a good studio? Go somewhere tried and tested by people you know. Ask any friends who have recorded before and find out how the recording went, what the engineer was like and how happy they were with the final result. You can also check your local press for ads, and most music shops will often have noticeboards.

It’s good to go to a studio that suits your style of music. If you’re a hard-core punk band and the studio only do RnB, that studio is probably not the one for you. Most studios will have demo reels with a collection of their showcase recordings. Ask to hear one in a similar genre and see if you like it.

Try to have a chat with the engineer if possible. The engineer is the person who is going to realise your dreams, so see if they are on your wavelength.

Studio Preparation Once you’ve decided on where you are going to record it’s a good idea to be as prepared as possible and know what you want. The clock will be ticking once you are in the studio and the last thing you need is extra stress from little things you could have prepared earlier.

and...ROLLING! OK. You’ve found a studio, you’ve rehearsed your tracks and now you’re ready to make magic! Recording can be a nerve racking process for many musicians because you’ve got to live with the results for much longer than a live performance. Here are some tips to help you get the most out of your recording session.

Mastering Sometimes seen as a bit of a black art, it is really a function of arranging your songs on the CD, fine tuning overall levels and tones, and cleaning up the tops and tails of each song. Most studios can do a simple mastering job for you. There are many mastering specialists that can prepare your CD for mass production.

Ask the audio engineer if they can give you an mp3 version at the above settings. This will save you having to do the conversion yourself.