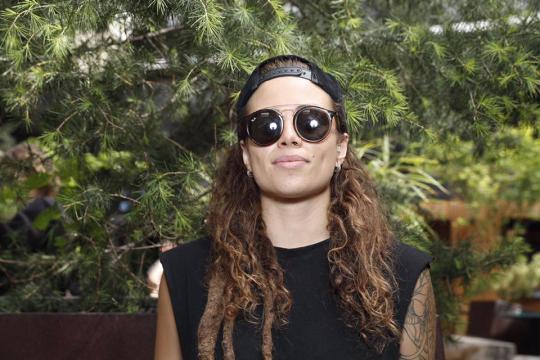 In a sea of dank prunes and dried apricots, one Sultana stood up to be counted in 2016. Her name's Tash, and she's from Melbourne. DIY doesn't even begin to come close to describing her aesthetic: Tash's songs are built around loops and samples she creates herself, emulating a full-band experience to shape a totally original sound, as vast and expansive as the internet, and so dense you could sink in it. But, to be honest, it's more than that. To pay homage only to her honeysuckled, mind-melting sound would be to deny the phenomenal songwriter shaping the music in the first place. First and foremost, Tash is wonderful at making tacitly impactful songs; that she can bring it all to life with loops and shredding guitar solos and that deeply powerful voice is just rich gravy spooned over Christmas lunch.

Keep in mind that Tash's rise to success has been as quick as it has been organic. In a little under a year, she's gone from busking on Bourke St in Melbourne to filling our Unearthed Bigsound showcase to capacity (with a line around the corner) in Brisbane this September. In a way, that's the truest Unearthed narrative you should be able to imagine: a self-made standout with a homegrown sound works super hard to develop her songwriting, stage presence, and a cult following, and then, by the sheer force of her own talent and volition, hits the stratosphere. And, while we're immensely proud to have played a part in her evident ascendancy, we get the feeling that Tash Sultana won't be slowing down for anyone, any time soon.

A photo posted by TASH SULTANA ON TOUR NOW (@tashsultanaofficial) on