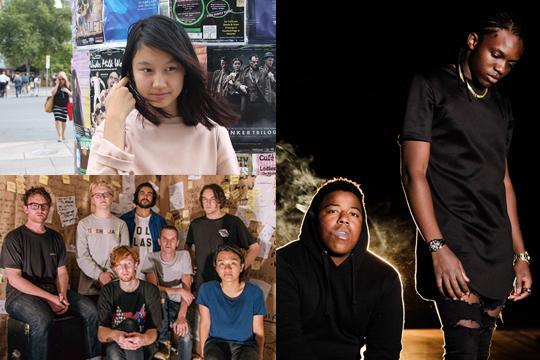 It might still be the butt of tired jokes at the comedy festival but when it comes to new music, Adelaide’s having the last laugh.

The Hard Aches, Brokers, Stabbitha & The Knifey Wifeys, LEO, Timberwolf, SKIES, Hummingbird, Strict Face, Sparkspitter, A Ghost Orchestra, Joy & Sparks... we could rattle off the names of killer new acts until we sound like Darren Lockyer.

"There’s actually quite a lot of haters. It’s lowkey though… yeah my little brother was like, ‘the flow on this was dope but this part was shit and this part is shit’. But I like that because it lets me know next time what to work on. I want to say if you hate, hate. You let everyone know how shit it is. It worked for Slim Jesus! That n*gga got big off hate. So if you hate the shit, post it up and say you hate the video. Because some n*gga is going to watch it and somebody is going to like it so you do it for me. Your haters are your motivators, bra. The more they hate, the more they will appreciate."

*WARNING: This interview has some strong language*

“A lot of the vocal samples and stuff in my tracks is basically just me going, ‘ahhhh’ into my laptop. Then I chop it up in Ableton and then arrange it until I feel like it sounds good. I’m generally just in my room. I’m not really screaming, as you can hear it’s pretty gentle and soft. My parents don’t really mind. They’re pretty supportive.”