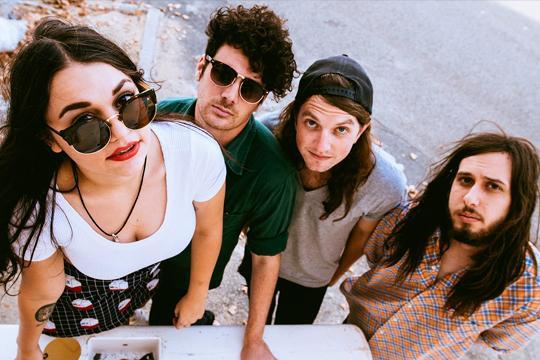 The Perth four-piece have had a hell of a year. They’ve toured the country twice – once with British India and once as headliners themselves – and released an second EP in I Don’t Think You Like Me. They crushed a Violent Soho / Smashing Pumpkins mashup for Like A Version on triple j Breakfast with Matt & Alex. Then they opened up Splendour In The Grass as our Unearthed comp winners in July, and then they headlined our showcase stage at Bigsound in Brisbane in September. What they’ve accomplished in a matter of twelve months truly reads like a bucket list of achievements for young bands.

There’s proof in this pudding, too. We’ve seen firsthand that their live show is a bona fide kiss with a fist: a platitude of sweet hooks play off some of the punchiest guitar tones to hit our ears this year. The singles – ‘Suck’, and of course ‘I Don’t Think You Like Me’ – are expected winners, but their whole set inspires moshing to the power of \m/. Throw in a sneaky stage dive from singer Sophie Hopes at Splendour, and you’ve got a recipe for the best kind of trouble. It’s the kind of good time that inspires confidence that Tired Lion are gonna be here for a long time, too.

Recalling the reckless abandon of Soho, the band captures the frustration of young adulthood in a whitewash of big-muff guitars and Sophie Hope’s poisonous lyrics. Speaking of Hopes – she’s a proper enigma. She’s the kind of band leader who straddles so perfectly the line between spewing spirited energy over the entire stage, and the lingering fear that she might actually spew over the entire stage. “I don’t think you like me,” she hisses, caustically, over and over on the band’s best-known track. All at once, it’s an iron-clad battle cry, one of the best choruses of the year, and irony at its most delicious – we love Tired Lion here at triple j Unearthed, and we’re stoked that they’re the winners of the Unearthed J Award for 2015. Congratulations!