The top 10 Unearthed Discoveries of 2016 so far, according to our Super Users 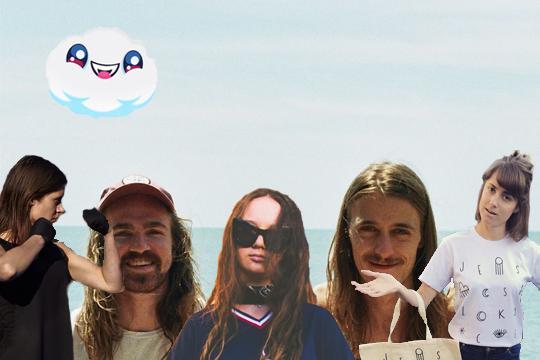 You’re about to dive headfirst into a listful of independent Australian rippers, as chosen by some of the biggest music fans and most tastemaking writers in the country.

We don't have to tell you what an impressive six months of music we've seen so far in 2016. Put simply, artists uploading to triple j Unearthed have been everywhere - making smart, surprising songs, playing killer shows, plotting world domination.

As we’ve hit the mid-year period, the triple j fam is taking a look back at some of the best and most lol-worthy moments of the year so far, and we set our best team of tunehounds – the triple j Unearthed Super Users – on the case of picking their top 10 tracks of the year so far. They’ve come up with some doozys, and they make great cases for 2016’s best tracks so far below:

Sydney-based duo La Mar have a talent for creating an atmosphere so intoxicating that their tracks feel like miniature worlds within themselves. ‘Tear You Down’ is a slice of dark and richly textured electronica, bubbling with shuddering synths, sparse beats and a bass so heavy that it anchors the soaring vocals. “Redemption can leave you all alone / stain your fingertips” the vocals narrate, in a style echoing that of Chet Faker and Sufjan Stevens – simultaneously intimate, brooding and minimalist.

‘Tear You Down’ is slow-burning and seductive. The careful layering of stripped-back electronic elements creates a compelling cinematic soundscape, and this is what brings me back time and time again. – Delia Bartle

The reviews I write involve a lot of pretty imagery. I’m talking sprawling landscapes, pleasant bodies of placid water, and birds dipping and diving in the clouds. Yeah, well, you can forget about all that because you’ll find abso-lutely none of it here. Pagan are triple j Unearthed’s all-guns-blazing emotional antagonists, and their track ‘Good Grief’ is a succinct example of what they’re about: tight-fisted punk onslaughts, fierce front-woman vocals and dark, anguish crusted themes.

The only imagery you’ll find here is of shadowed figures in mourning, the colours black and blood red, and the scorched earth this four-piece leave behind in their retreat from the stages around hometown Melbourne. Pagan might just be your gateway drug into heavy metal and hardcore punk. They’re a full-frontal assault on the senses, and they’re one of the tightest acts to hit Unearthed in 2016. – Rhys Thorpe

Tash Sultana? More like Tash Grape! This young gal is far from shrivelling up and spending the rest of her days as an #untradable in a child's lunchbox. ‘Gemini’ was the first I'd ever heard from her and it floored me straight away. The minimalistic production, paired with her incredibly controlled voice makes Gemini super blissful, and one of the best things i've heard on Unearthed for a while! – Kristy Barker

Jess Locke’s ‘Paper Planes’ is a perfectly executed piece of slacker pop drenched in everything that’s wonderful about modern Australian songwriting. Intricately constructed, deliciously simple chord progressions ease you into the track, and building a platform for Jess’ lyrics to leap off and shine: she is melancholic, understated, moreish and introspective in a way that feels all her own. The track’s film clip also stars a pretty nonchalant cat and whilst I usually call myself a dog person I can be swayed to appreciate a cat like that from time to time. – Dave McCarthy

Whether it frustrates you or excites you, there’s always something so intriguing about an artist whose genre is hard to pinpoint. Brisbane’s Mallrat falls into this category, catching my attention with a brand new, buoyant melting-pot called ‘Inside Voices’. The bouncy number, which sees the 17 year old both rap and sing, is the definition of #realtalk, giving a voice to introverts nationwide. The song’s beackbeat is fluid, supplied by tastemaking producer Tigerilla, allowing plenty of room for her  brutally honest lyric. It’s an outrageously catchy earworm of a pop song. – Debbie Carr

I listen to this song about three times a day – on my morning commute, on my evening commute, and at home usually when I’m making dinner. But sometimes three times turns into eight times and before I know it I’m in this constant loop of this song and I never want to leave.
Maybe it’s because I have lived (still live?) below the poverty line and this song brings a little tear to my eye, or maybe it’s because the vocals ooze a Australiana – I wanna scream the chorus at the top of my lungs and douse myself with the contents of a tinnie at the same time.
I wonder if all the boys in the band are good boys? I hope so. This track is too good to be true. – Meaghan Weiley

When I think of Australian music in the 1980s, it’s hard not to think of pub rock and John Farnham. Although I have no problem with either, this recalls a different kind of 80s Australiana: a great beat, a funky bass line, and although topline that is both deceivingly simple and catchy as hell. Dream Fiend are the contemporary  synthwave heroes we deserve: they’re there right now, defending the discotheque, fighting the good fight, and keeping our neon dreams alive. – Michael Chow

First up, how can you not love a song about coffee? It’s pretty much my favourite thing in life, and can make the worst Monday morning so much more bearable. And that’s exactly what Bugs’ ‘Instant Coffee’ does. It’s hard not to get sucked into the up-tempo, painfully infectious mesh of indie / surf rock that boasts legendary lyrics like “If I could sustain my body on instant coffee, I’d be alright”. The whole tune just exudes such a fun, sunny vibe that, teamed with Connor Brooker’s smooth and dreamy vocals, makes this track stand so far out. – Emily Mathison

‘Edge of Town’ from Sydney’s Middle Kids has surfaced as my favourite track of the year. I’ve played it so many times that my housemates have actually asked me if I’m intending on ditching them and moving to “the edge of town”. Vocalist Hannah Joy’s voice has this wonderful air of nonchalance that sits in stark contrast to the dirty guitars that kick in about halfway through. The track is a cool kaleidoscope of layers that mesh so effortlessly together - by the time you’re hit that glorious wall of sound, you’ve got nothing left to do but smash your air guitar into the ground. – Laura Kebby

Arian is a mystery wrapped in an enigma. We know that he’s a producer from Perth, but that's pretty much where the information stops. The music Arian creates evokes all sorts of feelings: ‘Come Down’ is his third single uploaded to Unearthed, and envelopes you in a warm bliss. The downtempo glitch beats harmoniously intertwine with simplistic piano, offset by a playful phaser. While the track is a short three minutes there’s something about bass heavy pulsating clicks which carry you to a point where time doesn’t exist. Getting lost in the song, you’d be forgiven for thinking you were coming up, rather than down – Jack Crane

Stick around for more mid-year stuff this week. triple j's got you covered with Veronica and Lewis' Top 10 Tracks of 2016 So Far tomorrow, and a look forward at some great albums still to come on Friday. If you haven't already, you can check out Double J's list of the best albums so far this year over here, and read some truly disturbing/hilarious Feature Album reviews from triple j listeners over this way.